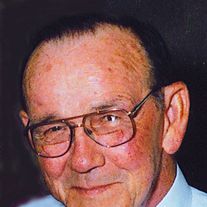 Maurice Dean Millard, 74 of Mt. Pleasant, IA, died Sunday, March 26, 2006 at the Henry County Health Center. Visitation will begin after 12 noon, on Wednesday, March 29, at the Olson - Powell Memorial Chapel, where the family will greet friends from 6-8 p.m. that evening. Funeral services will be on Thursday, March 30, at 10 a.m., at the Olson - Powell Memorial Chapel, with Daryl Coffin officiating. Burial will be in the Lockridge Cemetery. In lieu of flowers, memorials have been established to Henry County's Oakland Mills Park. Mr. Millard was born March 18, 1932, in Cuba, IL, to Leo and Coletha Haynes Millard. He was a 1950 graduate of Mt. Pleasant High School. On August 24, 1952, he married Margaret Lee in Fairfield, IA. She survives. Mr. Millard served in the U.S. Army in Germany during the Korean Conflict. He was employed at Dexter in Fairfield, the post office in Des Moines and Mt. Pleasant, and Superior Cable as a supervisor. He was self-employed for more than thirty years. He owned Rama Fur Company with his son, Ray, which bought furs and sold trapping supplies. He owned and operated the Oakland Mills Store and Bait shop for many years. People will remember him for his sense of humor, his generosity, and his honesty. An outdoors enthusiast, Mr. Millard enjoyed hunting, fishing, mushrooming, and trapping. He enjoyed doing crossword puzzles, bowling, and spending time with his family. Along with his wife, Mr. Millard is survived by three daughters, Maureen and her husband David Edwards of Mt. Pleasant, IA, Laura Millard of Salem, IA, and Mary and her husband Tim Stoner of Mt. Pleasant, IA; one son, Ray Millard and his wife Rita of Mt. Pleasant, IA; two brothers, Fred Millard and his wife Carolyn of Bartlesville, OK and Bud Crawford and his wife Norma of Mt. Pleasant, IA; and one son of the heart, Syd Millard and his wife Karla of New London, IA. He is also survived by six grandchildren and seven great-grandchildren. Mr. Millard was preceded in death by his parents; a son, Marlo Millard; and three brothers, Thomas Millard, Mahlon Millard, and Ira Millard.