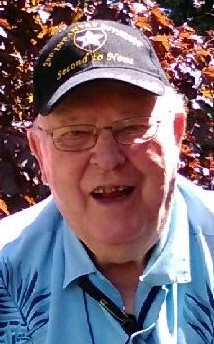 On Friday, July 24, 2020, Raymond Charles "Chuck" Crabb left this earth and awoke in the arms of his Lord and Savior, Jesus Christ. Chuck was born at home in Swaledale, Iowa on February 21, 1929, the third son of Harry and Marie (Fernau) Crabb. The family moved to Hampton and then Chapin, Iowa where Chuck graduated from Chapin High School in 1947.

He enlisted in the Army in 1948, and was stationed at Ft. Lewis, Washington, with tours of duty to Alaska, the Aleutian Islands, and the Hawaiian Islands. While at Ft. Lewis, he met the love of his life, his wife, Joyce. When he was discharged and went back to Iowa, he sent her a diamond ring and a bus ticket to Iowa, and they were married on July 2, 1950 at his parents' home in Chapin. To this lifelong union 3 children were born: Laura Crabb Deam, Wayne Crabb and Lynne Crabb Lovetinsky.

In 1951 Chuck began working for the Farmer's Cooperative Elevator in Chapin, and was promoted to Manager in 1954, a position he held for 30 years until his retirement in 1984. He then worked part time for the Soil Conservation Office in Hampton, fully retiring in 1991. Chuck and Joyce raised their family in Chapin and lived there until 1989 when they moved to Hampton, Iowa.

After their move to Hampton, Chuck was very active in volunteer service to several organizations. He served on the Hampton Public Library Board, the Care Board for the Hampton Nursing Home, and was an active member of the local American Legion chapter. He arranged and participated in countless Honor Guard military funeral honors and was the Chaplin of the National Second Division Organization for several years. Chuck was a member of Faith Baptist Church, and the Hampton Senior Center.

One of Chuck's favorite hobbies was dancing with his wife, Joyce, and watching them dancing together was truly poetry in motion. He was a voracious reader in his later years, and enjoyed spending time with his children, grandchildren, great grandchildren, and great great grandchildren. But above all else, Chuck enjoyed visiting with everyone he ran into, be they friends or strangers. He was quick to tell a joke and laughed easily and often. He enjoyed all his good friends at the Hampton Senior Center, and especially enjoyed playing cribbage there on Tuesday afternoons.


Memorial contributions may be directed to Chuck's family.

"Played Cribbage with Chuck for a few years now, he hated to loose and if I won he would say "let's play one more game" this would last until he won more than I did. Always a smile and always had a joke to tell. He will be missed."

"So sorry to hear of Chuck's passing. My Dad would take me along to the Chapin Elevator to get feed or to just visit with Chuck and Al. Chuck would always say "Les, I see you have the Boss with you today". Great memories going to the elevator and getting peanuts and a bottle of pop and getting to see Chuck. He'll be greatly missed. Paul Kruse"

"So sorry to hear of Chuck's passing! I first met Joyce and him at Christensen's when I was working there. He was always so happy and good for a new joke! Got to know him better at the Senior Center."

"Sympathy to the family. My Grandmother lived in Chapin and counted Chuck as a good friend. Anytime she had a problem or question, Chuck was who she called. She loved visiting with him. ? to the family."

"We are so very sad to hear this news. We thought so much of our neighbor, and his family. Prayers and love to the whole family. Larry and Elaine Crabtree"

"Chuck was a friend we could say anything without He will be missed George Dirks ."

"Chuck has come to my mind on many occasions. He was always ready to share a story and a chuckle. Blessings to the family as they remember the good life events spent together. "