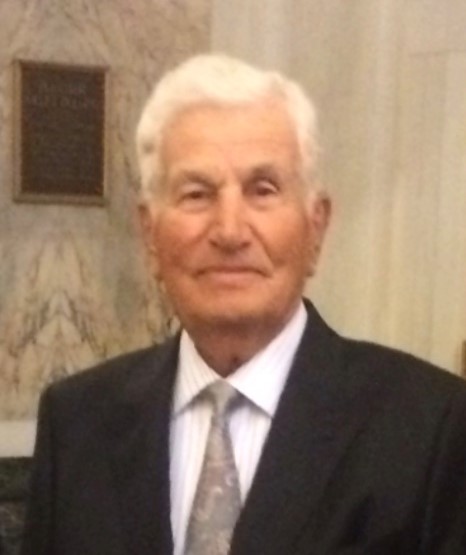 A Story of Love told by the Family of Georges Sakr

Our Father, Georges, passed away on Wednesday, July 29th, 2020 surrounded by his children. He was born on October 10, 1926 shortly before the Great Depression. His father, Elias, and mother, Josephine, lead a simple life. Elias worked as a mason and a builder while Josephine was a home maker. Our father was one of eight children, raised Catholic and very religious at an early age so much so that he, at one point, joined the monastery to become a Priest. After a short while he decided to go back and pursue a lay person life. The decision had nothing to do with our father's sincere attempt but rather believe it or not, some politics were involved.

The story ends well for he married a wonderful woman, had 4 children and 6 grandchildren, 2 of whom Georges Saker and Christopher Saker are United States Naval Officers. Georges is in the Naval Flight Training and Christopher started at Tulane Medical school, Rachelle Saker is finishing up at Parsons School of Design, Ella Szczublewski is heading to pre-med at Kalamazoo College, Kaylee Szczublewski is finishIng up high school and Nathan is in middle school.

A story of Love starts with our father, Georges, meeting our Mother, Wadad, who passed away in 1996, 7 months after her first grandson, Georges Saker, was born. Our father, Georges, was from a very modest family and our mother Wadad came from an affluent one. It was love at first sight but not an easy start for the two. Despite many well off suitors, our mother waited for 7 years until our father put himself through accounting school, built a career, and built a home. They wanted to do it on their own and they did.

Our father had a great love for his birth country of Lebanon and a greater love for his adopted country The United States of America that he immigrated to in 1990 to be with his 3 children who were already living there. A Story of Love continues with our Father Georges who cherished our Mother Wadad and after her passing and for 24 years he assumed the role of both a father and a mother, as well as a coach and a role model. Our father Georges never remarried or had a lady friend for that matter. He took up golf and cooking after our mother passed away. That along with his love for his kids and grandkids kept him carrying the torch with a smile on his face always as we all gathered.

For the past 11 years he took joy in living with his youngest grandchild Nathan and watched him grow to be a young man. Our father Georges loved everyone and they loved him back. He had many friends who respected him and did anything for him. He was very loved by many.

A Story of Love continued for Saint Sharbel Maronite Catholic Church were he was every Sunday, for his family, for his country of birth Lebanon, for his adopted country The United States of America, and for our Mother Wadad. She waited for him for 7 years to get married and now after waiting for him for 24 years.

They will rest next to each other and watch over us for their love continues.
We love you mom and dad.
Rest In Peace.

"A truely respectable man, just a class act, and a humble guy. You never forget a moment spent with him. I am privileged to have been a small part of his remarkable life. My deepest condolences to Joe and the rest of his family. "

"Ammo George was a father to all of us and he will always be remembered for his great spirit, his love for the family and his passion for golf. We cherished the moments we had with him. He lived a healthy life surrounded by his loved ones and will definitely be missed To Jocelyne, Joseph, Fady and Fadia and all your respective families, our sincere condolences and deepest sympathies. May He Rest In Peace, Allah Yirhamo Marc and Zeina Bouchebl "

"I met Mr. Georges Sakr (I used to call him Abou Joseph) back in 2006 when I first arrived to Detroit to assume my position as a Consul of Lebanon. I met him the first time at St Maron Church in Detroit, my father was with me and it happened that he knew Mr. Sakr since the 1980s when he was still in Lebanon. Since then, a friendship has started with both of our families, and he was the one who introduced me to Golfing, Cigars and of course taught me to walk the Golf course instead of riding a Golf Cart. In addition to that he was a great cook as well, and everytime he will go to Troy to make Mankouch he will insist on sharing some of his homemade Zaatar! Mr. Sakr was a man of integrity, honor and dedicated to his family and loved ones, he was generous with his love to other, and I enjoyed every moment spent with him during the days when I was posted in Michigan. To his beautiful family, Jocelyne, Joseph, Fadi and Fadi, Please accept on behalf of my family our deepest condolences for your loss. We cherish the many memories we have of your father, and he will be dearly missed. Bachir Sadek Tawk "