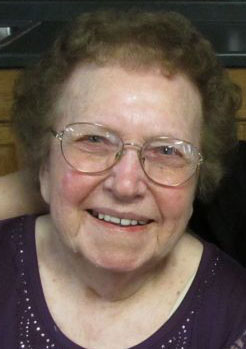 Loretta was born August 22, 1922, on a farm outside of Odebolt, Iowa, the daughter of Wilhelm (William) and Hulda (Dierenfeld) Vogel. She attended a one-room country school before going to Wall Lake High School where she played on the basketball team and in the school band. She graduated high school at the age of 16. She then studied at the University of Iowa and earned a Bachelor of Science degree in nursing in 1944. She began her nursing career in Detroit, Michigan, where she met her husband Anthel Eugene (Denny) Dennis. After getting married in 1946, the couple settled on a family farm outside of Wall Lake, Iowa. They were blessed with five children.

Over the years, the family moved from Wall Lake to Oklahoma, Kansas, and then Nebraska, before returning to a family farm outside of Wall Lake. Loretta moved to Ames, Iowa in 1972, when her marriage ended.

Loretta was a woman of faith and family. She was baptized and confirmed at Peace Lutheran Church in Wall Lake, Iowa. She was a member and past President of Aglow International in Ames, the St. Paul Lutheran Church in Ames, and most recently, Lifepoint Church in Ames. She loved sports and music and actively supported her children, grandchildren, and great-grandchildren in their sporting and musical activities. She was an avid fan of the Iowa Hawkeye football and basketball teams.

Loretta was also a woman of hard work and determination. She pursued her nursing career wherever she lived, at the same time as raising her family. She worked as an RN at Mary Greeley Hospital in Ames, and then as a public health nurse for Boone County for 15 years. She retired in 1988. She loved to garden and canned the many vegetables she produced. She was also a wonderful cook.

She was preceded in death by her parents; her son Daniel; her brothers, Lester, Roy, and Marvin Vogel; her sister Leola Schultz; and her ex-husband.

The family looks forward to gathering with friends to celebrate her life as soon as social distancing ends. In the meantime, condolences may be expressed online through Ames Monument & Cremation Center at www.amesmonument.com.

"Loretta was a blessing to all that knew her. She was always kind and friendly."