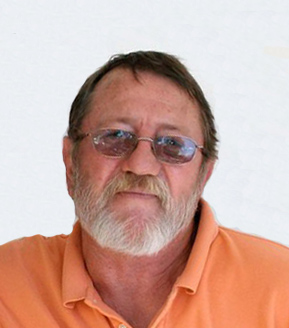 SIGOURNEY-Ron Kerr, age 73, of Sigourney, died Wednesday, September 2, 2020, at his home.
Ron was born March 29, 1947, in Ottumwa, to Emery and Nadine (Beasley) Kerr and graduated from Sigourney High School in 1965. He started college in Kirksville, Missouri but stopped his studies and served his country for four years in the United States Air Force. Stateside he served at Ellsworth Air Force Base in Rapid City, South Dakota guarding the missile silos. His overseas orders sent him to Takhli Royal Thai Air Force Base where he and his dog, Butch, guarded B-52 bombers when they came in from their missions. Ron married Linda Clarahan; they had a daughter, Tamara Kerr, and were later divorced. On November 1, 1986, he married Carolin "Sherry" Carter Hammes and became Dad to Kristina Hammes. Ron worked for the Natural Gas Pipeline in Harper for 20+ years. He served two terms on the Sigourney City Council representing the 1st Ward, had a lifetime membership in the Lacey Kerr V.F.W. Post #2308 and was proud to have achieved his private pilot's license.
Survivors include his wife: Sherry Kerr of Sigourney; his daughter: Tamara Kerr of Knoxville, Tennessee; four grandchildren: Courtney (Ryan) Long of Newhall, Shane Kerr of Knoxville, Tennessee, Colton (Shelby Christman) Hammes of Kirksville, Missouri and Chase (Alyssa Manchester) Tremmel of North Liberty; three great grandchildren: Kierra Torres, Reagan Long and Jaxen Hammes; seven siblings: Garry Kerr of Pleasant Hill, Karen Hart of Urbandale, Linda Kerr of Sigourney, Pam (Steve) Carter of Washington, Mike (Dorothy) Kerr of Keota, Carol (Bob) Mendenhall of Sigourney and Jackie (Kevin) Baughman of Keota; mother-in-law: Patricia Carter and many nieces and nephews, both related and non-related. He was preceded in death by his parents; daughter: Kristina Hammes; brother-in-law: Newell Hart and father-in-law: Bill Carter.

Due to COVID, plans for a celebration of life will be held at a later date.

A memorial fund has been established for the Wounded Warrior Project. Powell Funeral Home and Cremation Service in Sigourney is caring for Ron and his family. Tributes may be made at www.powellfuneralhomes.com.

"I remember Ron and I driving back and forth to the Amana plant to work as we both waited to go into the service. We decided to buy some beer and quit the same night which we did. He was a good friend and we visited over many years when I came back to Sigourney. We had some good times driving around the square in his 57 Chevy our Senior Year in High School. Rest in Peace my friend and thank you for your service. V/R, Mike Hart"

"Our condolences to the entire Kerr family. Walter and Diana Alderson."

"I am so sorry for your loss to Sherry & all the Kerr family. I am glad I got to see him at my brothers funeral. Many hugs to all of you from long time family friends the Grimm's. "

"Hugs to all Uncle Ron's family. He was a great guy and gave the best hugs! ?"

"Sorry for your loss. We were raised in the same town. Those were the good old days. He enjoyed causing trouble, but he was a good and kind kid."