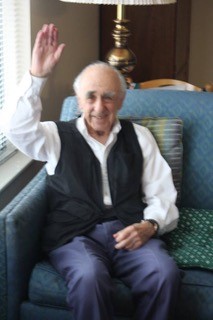 Seymour Irving Schlosberg (later Sherman) was born in New York on October 5, 1927 and grew up Brooklyn. His childhood included corner candy stores, egg creams at the local deli, and taking the subway to Brooklyn Dodger games. He was a small child who wore glasses, and after being picked on started lifting weights when he was 15. He continued this until he was in his late 80s. Sy was a talented gymnast who specialized in Men's Rings.

Sy joined the US Army just after the end of WWII. He spent his time in Hawaii, where he developed a love for tropical fruits and seafood. After leaving the Army he enrolled at UW Madison, where he met a Wisconsin girl named June Hoffman in an anthropology class. The two of them hit it off right away. They were married in New York City on June 27, 1950 in a simple, lunch hour ceremony at city hall. June always claimed the judge was a bit tipsy and made Sy repeat the vows twice while skipping her. Despite that, they were married for 70 years.

They spent the first four years of their marriage in New York, living in veteran's housing while Sy went to law school at NYU and June worked at Wausau Mutual Insurance. Over the years they expanded their family with the addition of Paula, Bob (Martha), and Steve (Kathleen Kinney). Most of their married life was spent in the Chicago area, in Park Forest, Wilmette, and Northbrook.

Sy was a devoted father and husband. He did his best to instill his love of exercise and fitness into his three children, installing chin-up bars on the doors on their rooms. They never used them. He was a hands-on dad in an era where that was unusual. It was Sy who was there to "greet" any of his kids who came home past curfew. He raised guppies and other fresh-water fish.

He was a skilled tax attorney, practicing for many years as head council of the IRS Chicago Office. In 1986 he retired from government and immediately entered private practice as a partner with Neal, Gerber and Eisenberg. His second, and final retirement, was in 1999.

In 2001 June and Sy decided to retire in Madison. They loved their years here and were active participants in PLATO classes. In 2012 they moved to Capitol Lakes Independent Living community, where they made many friends and greatly enjoyed living there.

For over 70 years June and Sy were best friends and always enjoyed each other's company. They were both avid readers and somehow always had something to talk about. The magic never left their relationship.

During his last year he was able to stay at home because of the services received from Agrace Hospice. His care coordinator, Minako Voeltz, provided him with much support and friendship. Because of Covid-19 there will be no service or memorial. In lieu of flowers, donations to Agrace Hospice can be made.
He will be greatly missed.

"i had the pleasurer of know Sy through his wife June and daughter Paula. His wit and humor were always ready to shared with all willing to appreciate. So fitting that he and June enter the next chapter holding hands together rest i Peace SY. Thanks for the colorful jokes."

"Sy was a very bright and interesting guy and I always enjoyed getting his perspective on things. I particularly enjoyed his unique sense of humor. Sy & June were wonderful people, parents and grandparents. They always treated me like family. I will be forever grateful for their kindness and generosity. My sincere condolences to the family."

"What an amazing story of love in life and death? My deepest sympathy to the family. Thanks for being so kind! Rest In Peace SY and June?"

"Sy....Thank you for loving and taking care of my Big sister...I love you for that as I love my sister...You were a great, dedicated couple and you and her are together now, as it should be...My good memories of you and her will always be with me and I can not ask for more than that...Rest well, my brother-in-law...A life well lived...Ron and Joanne Hoffman"

"Sy was my brother -in -law. At first I did not like him because he took my beloved sister June away. But that didn?t last long and I loved him dearly, even his dirty old man jokes! He cared for his family very much and it was easy to see how much he cared for June. When I was 7 years old I spent a summer with them in New York City. A scary but funny memory : they took me with them to movies, some not appropriate for a 7 year old. One is now a cult favorite, Them, about giant ants and a little girl just my age. Through the years Sy could always scare me with making the noise those ants made! He got me every time. It became a joke between us. Sy, my favorite ( and only) brother-in-law, I love you, I miss you. You will live in my heart forever.?"

"My dad was the best. He taught me to be the smartest, bravest person I could be and to never kowtow to anyone. I will miss him. "