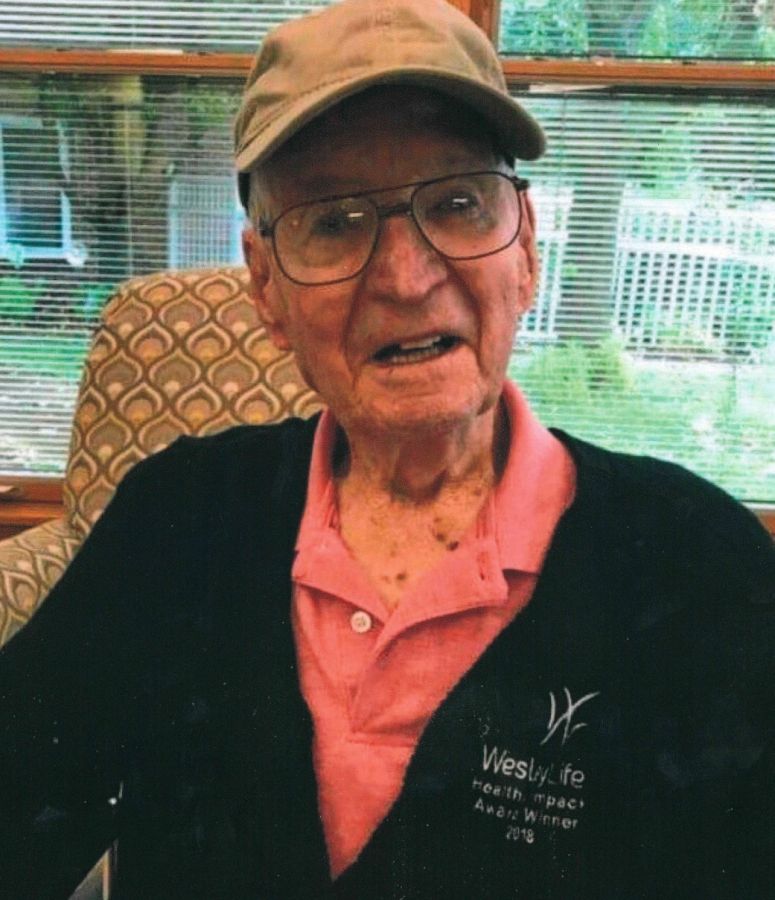 Robert E. Clark, age 104 of COlfax, passed away on Wednesday, September 9, 2020 at Park Centre in Newton. Private graveside funeral services were held at the Colfax Cemetery. Condolences may be left at www.coburnfuneralhomes.com


The son of Clarence and Martha Jane (Lamb) Clark, Bob was born on August 14, 1916 in Colfax, He graduated from Colfax High School in May of 1935. While in high school, Bob was captain of his basketball team. He lettered in both basketball and football. After his graduation, Bob worked in the finishing department of the Monroe Company in Colfax. During this time, he also found the time to organize an orchestra called the Nite Owls. This band featured eight members. Bob, who played the piano and trumpet, hired a high school classmate, Royal Cross, to work for the band. One night, the band was paid $2.50 for a gig - unfortunately, the taxi fare to get them there was $3.00. The nite owls played at such venues as the Val Air Ballroom in Des Moines, Mineral Springs Day in Colfax, the Surf Ballroom in Clear Lake and in Missouri.

Bob went on to enlist in the United States Army at Camp Dodge on January 12, 1943, when he was 27 years old. He served as a Medium Tank Crewman and expert M1 Rifleman. He was with the Company C-43rd Tank Battalion, 12th Armored Division known as the Hellcats. He left the United States on September 20, 1944, for France. While overseas, Bob was involved in a number of battles. His decorations and citations included American Theater Service Ribbon, European African Middle Eastern Ribbon, two Bronze Service Stars, WWII Victory Medal and the Good Conduct Medal. Bob's tank was captured and destroyed in France on January 17, 1945. Bob and many others were forced to walk by the Germans in the historic "Black March." That year was named one of the harshest winters in Germany's history and Bob spent the first part of it as a prisoner in Stalag 5A. The camp was liberated on May 16, 1945 and Bob arrived back in the United States four days later. His total length of service was two years, two months and 12 days. After Bob came home, he returned to his job at the Monroe Company in the capacity of supervisor until he retired.

On September 13, 1952, he was united in marriage to Rose Nikolish in Waterloo. They lived in Colfax and loved to spend their winters in Texas. They were blessed with 60 years of Marriage.

"what a nice guy. he told me while i was at Park Center visiting my husband that he was best friends with my uncle Jim Callahan. he talked so highly of Jim. of course Jim was killed in the war going down in his ship. i was amazed at his sharp memory at his age. i loved to hear the stories of my uncle that i never knew as i was not born yet. so glad he had a great birthday party and they honored him for being a vet and his age, wow. RIP Bob. one of a kind. Kathy Callahan Wood"

"What a wonderful gentleman. He loved to tell stories. Will Purscell enjoyed his company."

"So sorry to read this. Bob was my cousin and I visited him at Park Centre. So happy that he had his celebration for his birthday and folks could go. RIP, Bob, will so miss our visits!!"