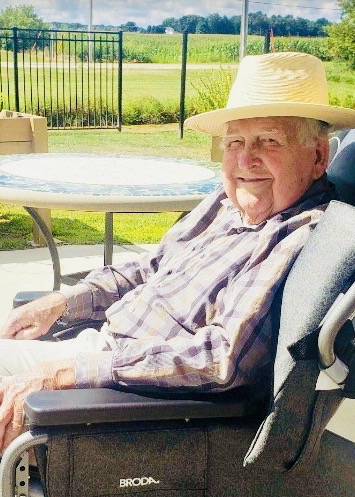 James was born on September 12,1926 in Almond, Wisconsin. He was a proud University of Wisconsin - Madison alumni with a degree in education. He served two years in the United States Army. While stationed in Kentucky Jim met the love of his life, Martha Turner.

After serving in the Army, Jim returned to teaching in the Minneapolis, MN school district. While residing in Edina, MN for over 40 years, Jim and Martha raised three children, enjoyed life long friendships with neighbors and friends, and dedicated their life worshiping, singing in choir, and taking on various leadership roles at St. Peter's Lutheran Church. In 1996, tired of Minnesota winters, Jim and Martha flew south to Tucson, Arizona. They immersed themselves in Arizona life. Jim especially enjoyed golf, tennis, and singing with the Saddlebrook Singers. In 2005 they moved back to the Midwest, this time to the Madison, Wisconsin area where Jim continued his active lifestyle golfing in the summer months and bowling in the winter.

Jim is survived by his children: Scott (Kimberly) of Cave Creek, AZ, Amy (Tony) Schleinz of Oregon, WI, and Julie Stertzbach of Brunswick, Ohio; five grandchildren: Melissa (Ryan) Lipovsek, Parker (Andrea) Schleinz, Jerry (Laura) Schleinz, Austin Stertzbach and Amanda Stertzbach. He was also blessed with two great grandchildren, Johnathon and Hunter Lipovsek, and his third great grandchild (Jerry and Laura) is on the way! Jim is also survived by his brother, Charles Hilgendorf, his sister Martha Eddy, and many nieces and nephews.

Jim was preceded in death by his loving wife, Martha Turner Hilgendorf in 2013, and three brothers, Harold, Alan, and John Hilgendorf.

A small, private family service will be held on an as yet undetermined date, where he will be interred next to his wife Martha at Vista United Methodist Church in Tucson, AZ.

Memorials may be made to BeeHive Homes in Oregon, WI. The family wishes to thank the staff at BeeHive Homes and the staff at Agrace Hospice Care for their loving attention and care given to their father over the previous four months.

"It was an honor getting to know Jim, I enjoyed every conversation with him. He was quick with a smile, looked incredibly young, never complained, and was so interesting. I loved learning about his life, and his love for his family. He was blessed with the gift of years, and although I did not know him long, I will never forget him. Thinking of you Amy, and your entire family, how lucky you were to have such a wonderful Dad, and so many memories."

"Such a sweet man, he brightened our day, everyday! It was a pleasure getting to know him and spending his last days with him. You will forever be in our hearts.????"