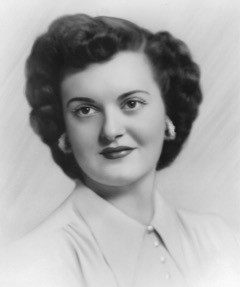 Dorothy Griswold (Prall) passed away peacefully at the Hospice House after a brief illness at the age of 96. Dorothy was born in Omaha, NE, on May 17, 1924, to Helen and David Prall. She had one younger brother, Bill. Her family moved frequently during the depression as her father, a claims adjuster for GM, was transferred to various locations. The family lived in Omaha, Kearney, Lincoln, where Dorothy graduated from Lincoln High School in 1942, and Cleveland, Ohio.

Dorothy worked in the GM Fisher Body plant in Cleveland on B-29 bomber construction prior to joining the Women's Army Corps in 1945 as a medical technician. After discharge in 1946, she returned to Omaha, where she began working in the Brandeis Linen department downtown. During her employment at Brandeis, she would participate in the seasonal fashion shows sponsored by the Fabric department as a model. After she married and started a family, Dorothy was very involved in her children's schooling and activities, was an accomplished bowler and worked keeping the books for the family business. In her later years, Dorothy stayed active and enjoyed many activities with friends and family, especially Saturday get-togethers to watch the Huskers play football. Cats were always present in the fabric of her life, from childhood until her recent passing.

Dorothy will be remembered for her mechanical prowess, sense of humor, her directness and her strong sense of independence. She will be greatly missed by those she has left behind.

"My heartfelt sympathy and prayers to the family, May your hearts be filled with wonderful memories of joyful times you shared together as you celebrate a life blessed and well lived. Psalms 90:10"