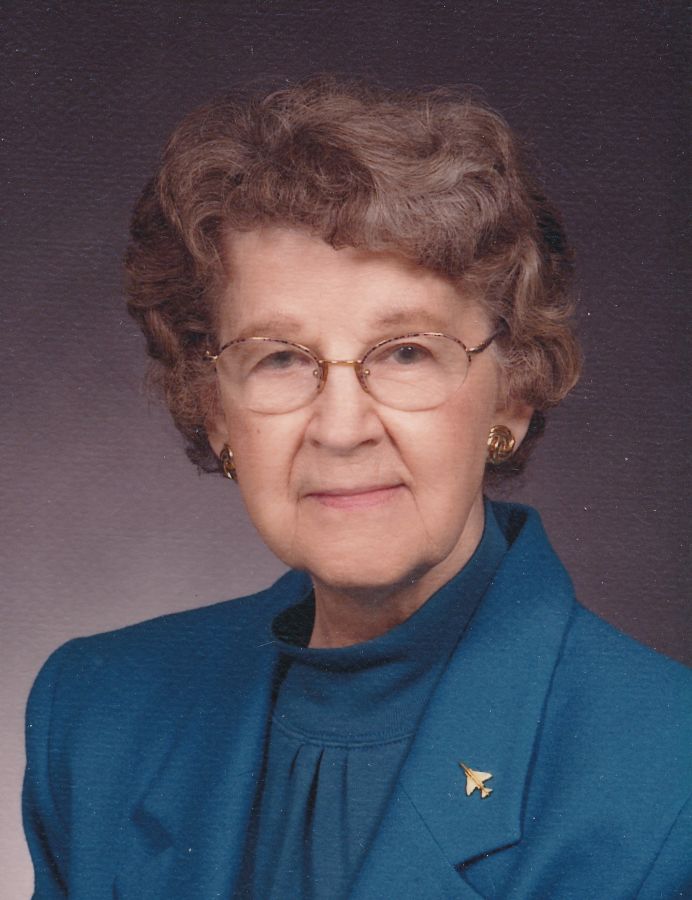 Julia Bina departed this world to be with her beloved husband and her Lord on November 15, 2020, she was 96 years of age.

Julia Cecilia Galuska, was born January 4, 1924 to John and Anna Galuska on the family farm in Ackley, Wisconsin. She was the only girl of five children. Julia was a true farm girl, knowing all the details of running a dairy farm from one end to the other. She attended the Eau Claire school where she was a straight-A student. She left school to help on the farm then later moved to Antigo and took up employment at J.C. Penny's and later at other local businesses.

Julia met the love of her life while waitressing at the Uptown Cafe. A young military man caught her attention, that young man was Edward "Eddie" Bina, a decorated combat pilot recently returned from the war. It was there that the life-long romance began. Julia's first date with Ed was very unique, Ed rented an open cockpit biplane from the Antigo airport and both of them took off for the skies, performing some aerobatics over the family farm.

Julia and Ed were married in 1948 and that's where their adventures began. Julia was now an Air Force wife as Ed was a newly minted Air Force officer and they took off to the far reaches of the world all while raising three children. As an Air Force wife, she set up housekeeping at each new assignment in Japan, Illinois, Colorado, the Philippines, Montana, Wisconsin, Germany, Michigan, Virginia, California and Ohio. It was an exciting way of life and she met every challenge with grace, poise and strength. Julia found herself alone with the three children while Ed was stationed in Vietnam and Iceland, she excelled in keeping the family and household running smoothly. During those years apart they wrote letters relentlessly, nearly every day, the distance between them would not diminish their love for each other. She stayed socially connected through the Officer's Wives Clubs at each base and had many friends around the world with whom she stayed in contact via letter writing. She loved flowers and gardening, and no matter where we found ourselves she created wonderful flower beds. Julia was an excellent cook and they often enjoyed hosting dinner parties for their friends. Julia was a class act. She did it all with style and grace and always with an elegant flair that lent itself to being a career officer's wife and marvelously supported Ed's career.

Julia and Ed settled in Antigo and continued their travels and adventures until she started taking care of Ed in his final years with Alzheimer's. After Ed passed, she remained in the house they built together spending her time gardening, planting flowers, and working on her needlepoint projects. Julia's passion was singing, she had a beautiful soprano voice. Throughout her life, she joined local singing groups wherever they were stationed. She was never far away from her music that she loved so much. She joined a local Antigo band with Ray, Rose, and friends, and sang at local events and at nursing homes, they were a hit wherever they performed. She was always so proud to be a part of this band. She spent the last three years at Evergreen Terrace after developing some dementia herself. Julia remained a life-long member of St. Hyacinths church and sang with the choir.

Julia was a joyful and optimistic person and was always humming a tune and dancing around the house. She was also level headed and knew her own mind. She knew who she was and what she believed in. She was not afraid to stand up for herself or defend us if she felt any injustice. She loved her kids unconditionally and was always there for them throughout their lives. She loved us all, her family and grandchildren. We're so proud she was our mother.

Julia was preceded in death by her husband of 57 years Edward Bina; her parents, John and Anna Galuska; and her brothers, Edward his wife Edna, Eugene and John.

There is an old Air Force saying: Old pilots never die, they just fly higher. I'm sure that dad, an Air Force pilot, is now soaring to new heights with his forever copilot, Julia.

In lieu of flowers, donations can be made to Evergreen Terrace or Saints Mary and Hyacinth Church in Antigo, Wisconsin.

A funeral Mass will be held on Saturday, November 21 at 10 a.m. at SS Mary & Hyacinth Catholic Church with Rev. Callistus Elue officiating. Visitation will be Saturday at the church from 9 a.m. until the time of Mass. Burial will take place at the Elmwood Cemetery in Antigo.