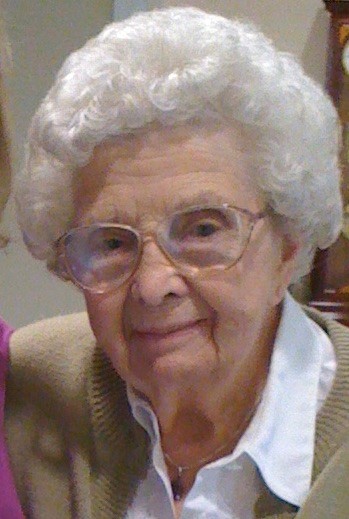 Irene Menghini died peacefully in her sleep on December 12, 2020-- just six weeks shy of her 104th birthday. Since 1990 she resided at the Emerald Heights Retirement Community in Redmond, WA.

Irene was born on January 26, 1917, in Wallace, Idaho. While her legal name was Olive Irene, all of her friends knew her as simply Irene. She was the second child of Lotte and Mel Mortisen. She had an older sister (Mary), a younger brother (Howard), and a younger sister (Helen). Irene was the last living child of the Mel Mortisen family.

She and her family moved from Idaho to Longview, WA, in 1930. Irene graduated from R.A. Long High School in Longview in 1934. On August 5, 1939, she married James (Jim) Menghini at the Longview Community Church. They were married for 69 years. Jim died in May 2008.

Jim and Irene had two daughters: JoAnn Menghini Benseler and Patricia Menghini O'Nan. Patricia died in 2015. Those surviving her include her oldest daughter, JoAnn Benseler, and son-in-law, Larry O'Nan. Her four grandchildren include James and Derek Benseler and Caroline O'Nan Woolard and Jessica O'Nan Escamilla. She was a great grandmother to 10 great-grandchildren: Alexander, Christopher, William, Reagan, and Samuel Benseler; James Arthur, Brodan, Calleigh, and Jenae Woolard; and Cash and Silas Escamilla.

Irene was a gracious host, a lover of people, and a caring mother and grandmother. She enjoyed golfing, gardening, playing bridge, cooking, and ballroom dancing. Her interment will be in Longview, WA.