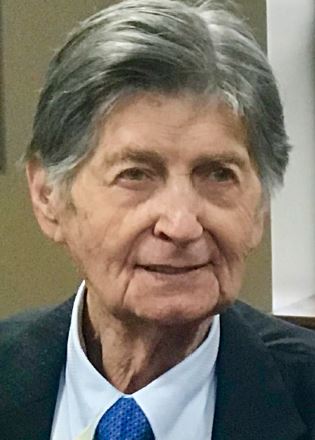 Dennis was born in Burlington, IA, on February 22, 1929 to parents Elmer and Minnie. As the son of a Lutheran minister, Dennis spent his childhood in various communities throughout the Midwest before leaving home to study at Gustavus Adolphus College where he received his B.A. degree in 1952 and then proceeded on to University of NE where he received his Master's degree. While teaching for Deuel County Public Schools in Chappell, NE, he met his beloved Marge. Dennis and Marge were married at Grace Lutheran Church in Cook, NE, on November 30, 1957. They started their life together in NE, but ended up heading north to MN where they put down roots. They started their family in Owatonna, MN, while Dennis worked as the school system's speech coordinator.

In 1964, Dennis had an opportunity to join staff at the Mayo Clinic Department of Neurology as a speech pathologist. This meant a move to Rochester, where he and Marge raised their girls. After twenty-five years at the clinic, retirement allowed him to pursue a hobby in woodworking as an active member of Zumbro Valley Woodturners, and enjoy many worldwide travels with Marge. Dennis was an avid reader, gifted singer, thespian, writer and so much more. He was also an active leader in Gloria Dei Lutheran Church congregation for many years.

Dennis is preceded in death by his wife, Marge; parents, Elmer and Minnie Holt; siblings Lloyd Holt, Dorothy Hagstrom, Marjorie Holt, and Dale Holt. He is survived by: daughters Deanne Nash, Charlene Pryor and Melinda Gelfman; sons-in-law Jim Nash, Chris Pryor and Russell Gelfman; granddaughter, Chloe Pryor. Dennis' family would like to acknowledge and thank the compassionate and extremely competent team of professionals of Mayo Hospice and Saint Marys Hospital who cared for Dennis in his final days. There is no local memorial planned at this time. Dennis and Marge's cremains will be interred at Cook Cemetery in Cook, NE in the spring.

Ranfranz and Vine Funeral Home is honored to be serving the Holt family; to share a special memory or condolence please visit www.ranfranzandvinefh.com

"As a colleague of Marge, I got to know Dennis when he joined Marge at RCC/RCTC retiree events. Dennis was such a kind and gentle man, a genuine pleasure to be around and converse with. The Holt legacy will live on eternally through a scholarship endowment account established at the Rochester Area Foundation. Sending the Holt family loving thoughts, prayers and sympathy."