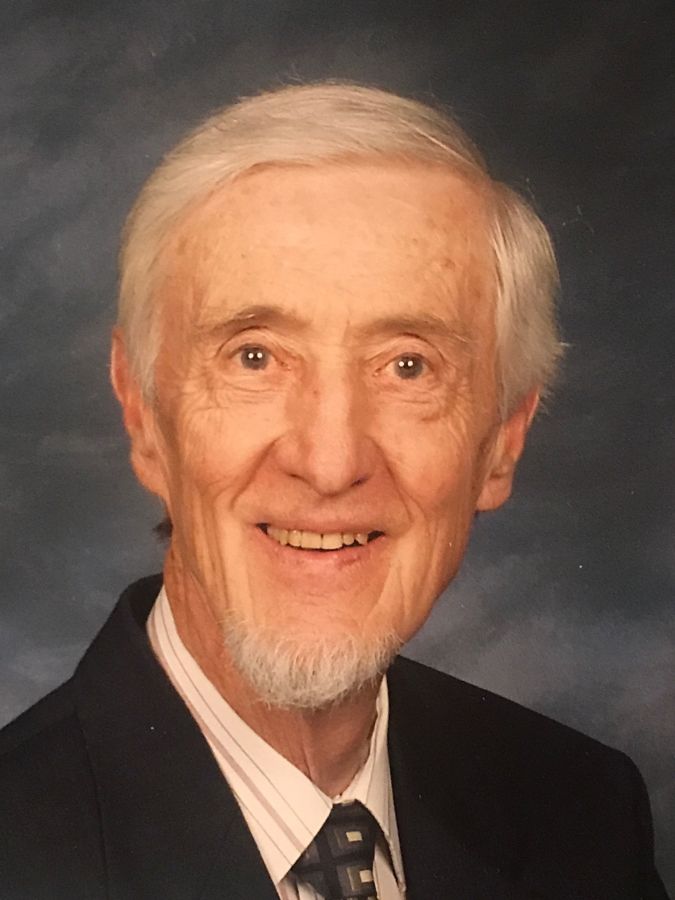 During his 89 years, Peter wore many hats (and tool belts): missionary, pastor, chaplain, counselor, carpenter and jack-of-all-trades, as well as husband, father, grandfather, great-grandfather and friend to many.

Peter was born Alan Peter to Andrew "Norman" and Ruth Skogerbo on April 21, 1931, in Milo, North Dakota, the second of three children. The family farmed wheat, but after several unsuccessful crops during the Dust Bowl, they loaded their possessions into their old Model T, and moved to be near Norman's family in Story City, Iowa, when Peter was 5 months old. Peter's namesake, his grandfather Peder Skogerboe, emigrated from Ardal, Norway in 1887. Peter and his family remained close to their Norwegian heritage. After several years in Iowa, the family moved to Austin, Minn., where Peter spent his formative years. He attended a one-room schoolhouse for grades K-8. By the time he started high school, Peter came to a commitment that set the stage for the remainder of his life. He began a lifelong relationship with God, which led him to seven decades spent in ministry and service to others.

After graduating from Austin High School in 1949, Peter enrolled in Northwestern Bible School in Minneapolis (now University of Northwestern - St. Paul), when Billy Graham was president of the college. While at Northwestern, he met a fellow student, Vivian Rosnau. On June 11, 1954, one week after Peter's graduation, they were united in marriage in Golden Valley, Minn. After the wedding, they set off with $75 in combined savings and cash gifts to spend the summer teaching Bible school at a camp in Colorado, the first of their many adventures together. They shared a love and gift of music. Peter played steel and acoustic guitar, Vivian played piano and accordion; together, they sang.

Upon their return that fall, Peter began seminary at Northwestern, then was offered a student pastorate in St. Paul. During that time, their son Alan was born, then their daughter Judy. They stayed at the church until they received a call to Newton, Iowa, in the spring of 1958. During their year and a half there, they applied with ABWE (Association of Baptists for World Evangelism) and were accepted to go as missionaries to Chile, their biggest adventure yet.

They moved to Rochester where Peter's parents lived to prepare and raise support, during which time they added a son, Larry. In 1961, they left for language school in Costa Rica with a 6-year-old, 4-year-old and 4-month-old. After one year in language school, they flew to Panama and boarded a ship for the 3-week journey to Chile. They spent 3 years in Talagante, followed by a year back in the US, then 4 years in the Las Condes neighborhood of Santiago.

In Chile, the Lord gave them a heart for the people of Latin America. Peter helped with tent crusades, his church in Talagante distributed clothing and food through President John Kennedy's Alliance for Progress initiative, he built a lighthouse for a booth at the International Exposition, he helped produce radio programs and ran church camps. They made lifelong friends through their ministry there.

After two terms of service in Chile, they returned to the States, arriving in Rochester on June 16, 1970. Seven months later, their daughter Kathryn was born. In 1973 another daughter, Karen Joy, was born with Down syndrome. She died of a weak heart at 9 months old. Peter was a loving father. His children remember bedtime back rubs and guitar serenades.

Before leaving for Chile, they had purchased a 1913 farmhouse on 11th Avenue in Rochester. Over the 60 years it was in the family, it became home to many-it housed all of their children through the years, Peter's mother, three grandchildren, several foreign exchange students and families from Mexico, a nephew, and several pets including one special dog, Copper. Peter was blessed to have his children and grandchildren live in the Rochester area. He developed a special bond with his youngest grandson, Spencer, his little shadow who became his big shadow. "Papa Pete" helped raise and take care of him until the roles reversed and Spencer became his grandfather's caregiver. He believed we have a responsibility to pass on a godly heritage to our descendants, often quoting Matthew 6:33: "But seek first the kingdom of God and his righteousness, and all these things will be added to you."

In 1971, Peter started the Pine Island Baptist Church, then served as assistant pastor in two churches successively. In 1989, he started the Stewartville Assembly of God church, and began a Hispanic ministry, Iglesia Cristo el Rey. In 1997, he moved Cristo El Rey to the Rochester Assembly of God church, and the following year, became the congregation's full-time pastor. He retired from Stewartville Assembly of God in 1998, the first of his many retirements. He also conducted church services in Spanish at the Federal Medical Center and held Bible classes in Spanish for inmates at the Olmsted County jail. He retired as pastor of Iglesia Cristo el Rey in 2000. As Pastor Pete, he was known as a man who would give you the shirt off his back. In fact, Vivian kept a separate bank account so he wouldn't give away everything.

For over 20 years, Peter was a chaplain in the police and fire chaplaincy corps in Rochester, volunteering his time as a first responder to support grieving families. He was also a carpenter and builder. As owner of Associated Builders, with David Tinetti, he was once noted for his unconventional method of adding a third story to a house by crane. He was involved with Camp Victory in Zumbro Falls since its inception and served as maintenance director until 2011-the last of his retirements.

Peter lived in the home he shared with Vivian until her death in August 2019, at which time he moved into the memory care unit at Cottagewood Senior Communities. He often joked that the only thing worse than his memory was his hearing.

He was a man of good-willed humor and Nordic stoicism, a man who lived with love and integrity, and a true man of God. He was a man who was there for countless people through their ups and downs: marriages and births, incarceration and death. He likely would've left you with a Bible verse during this time of difficulty for so many. From Psalm 46:1-2: "God is our refuge and strength, a very present help in trouble. Therefore we will not fear, though the earth should change, and though the mountains slip into the heart of the sea." NASB

A visitation will be held Sunday, January 17, from 4:00 - 6:00 pm at Ranfranz & Vine Funeral Home. The family will hold a private funeral Monday morning. The private funeral will be livestreamed on the Ranfranz and Vine facebook page: https://www.facebook.com/Ranfranzandvine/ Inurnment will be at Oakwood Cemetery. Due to COVID-19 health concerns, masks are required at all services with proper social distancing measures. If you would like to send a note to the family or share a memory of Pastor Pete, please send cards to: Family of Peter Skogerbo, 2104 Telemark Lane NW, Rochester, MN, 55901. Memorials may be directed to Camp Victory and Iglesia Cristo el Rey. Ranfranz and Vine Funeral Home is honored to be serving the Skogerbo family; to share a special memory or condolence please visit www.ranfranzandvinefh.com

"My condolence to your family, Peter reflected the love of JESUS more than any other person I have ever met. The time I remember most my Dad was in the hospital. And I met Peter in one of the main hallways, As we greeted he asked what I was doing at the hospital , I told him that my dad was probably dying and he said I will pray for him and right there in the middle of busy St. Mary's hallway we bowed our heads and Peter prayed for my dad. That meant so much to me. He was a good man."

"Sincere condolences to the entire family, but especially to Kathryn, very dear to our family. "

"Our deepest sympathy to all of the family of Pete Skogerbo. So many great pictures from his life. God comfort you in your loss. Mary & Gary Matzinger (Laabs)"

"Pastor Pete & Vivian served God to the fullest! They are now enjoying their life they worked so hard for in Heaven! pastor Pete married my husband and I out on our back deck and I will always treasure him. His ways were always Godly and he had a peace in him that I always seen in him and Vivian. They would always pray with me and I will always remember them both! They are both in heaven definately!???"

"My sympathy to each of you for your loss. I was able to know Pastor Peter through Assembly church. What a kind man with the love and warmth he displayed to all. To Kathryn and Judy my heart goes out to you."

"Judy, I am sorry for the loss of your precious father. I realize that you also lost your dear mom not so long ago, and your dear hubby a few years ago. I think of you often. Blessings and love to you. Louise meyer, Duluth. Louisemeyer41@icloudcom. "

"Alan, Judy, Larry and Kathryn, Your father was a kind man with a heart for the Lord. I remember his ease with people and his gentle sense of humor. I will never forget dropping over to see him and Vivian at their home, and before I left we all had a "little lunch." May our Lord Jesus Christ comfort you. Love, Lenore Poole"

"Tracy, may I offer my condolences to you and your husband on the loss of your father-in-law. What a very wonderful life he had, and was an inspiration in the many roles he was dedicated to. May he rest in peace. Karen Bambenek"