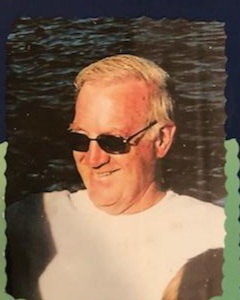 Our wonderfully funny and kind husband, dad, grandfather, brother and friend lost his boxing match with Parkinson's disease on January 19, leaving us all sad, but grateful for the time we had with him.

If you knew Jim, you knew he answered to many names - Herb, Gym, Jay Aitch, Jimmy Herbie, Hey You - but the name that delighted him most was "Toppy". His first grandson, who was learning to talk, pointed to Jim and said, "Toppy!" and that name stuck.

A California boy, Toppy was born in Watsonville, where he grew up with his sister and brother, often getting into trouble with his folks, the ever-patient Elmer and Virginia Caylor. He often said it was amazing he made it to adulthood. Jim graduated from Watsonville High School, and San Jose State University, where he got his degree in accounting.

Toppy was a patriotic man, and served in the United States Air Force. While at McChord AFB in Washington state, he and a buddy decided one night to go meet some nice girls at the University of Washington. A chance blind date introduced him to Luanne Timm, a UW student. In 1968, they got married, and began their next great adventure together.

Jim served as a budget officer at Richards-Gebaur AFB near Kansas City, MO, achieving the rank of Captain. After his service, they moved to WA state, where he worked in accounting for a real estate firm.

A family vacation trip to Watsonville proved monumental - while there, the Caylors discovered two Hallmark stores for sale in the Monterey area, and decided to go into the stationery/card store business, expanding from Monterey to San Jose.

They also became actively involved in the Carmel/Monterey community, and made lifelong friends there. After 33 years and many holiday rush seasons in the greeting card business, Jim and Lu retired and moved to Issaquah, Washington. For many years, Luanne's dad was a part of their household, and they were loving and patient caregivers, taking Bob to Maui and Loon Lake, WA for getaways. Toppy was a football junkie and near-rabid fan of the San Francisco 49ers, as his grandsons know. He had an insatiable sweet tooth, enjoying all forms of chocolate - Ding Dongs, See's candy, and anything Hershey's. Toppy loved going to the Village and Fifth Avenue Theatres, and especially any productions his grandson was in.

Toppy was diagnosed with Parkinson's disease a few years ago, and for a long time, kept the disease at bay. One of his therapies was a boxing class, where he made many friends with people in the same boat - and was able to build up a pretty mean right hook. It can be said that he fought the good fight, and like Ali, hung up his gloves.

At this time, no service is planned. Memorials may be made to the Michael J. Fox Foundation at https://www.michaeljfox.org, Rock Steady Boxing at https://rocksteadyboxing.org, (and other charities. ) Cascade Memorial is handling the arrangements.

"Jim obituary is beautiful and so nice to know what a wonderful life he had and married the love of his life. My heart and love goes out to you Luanne and your family as you grieve during this difficult time. In time may your broken heart heal and tears turn to smiles as you remember this great man you all loved so dearly. Chris and Denis Stephan "