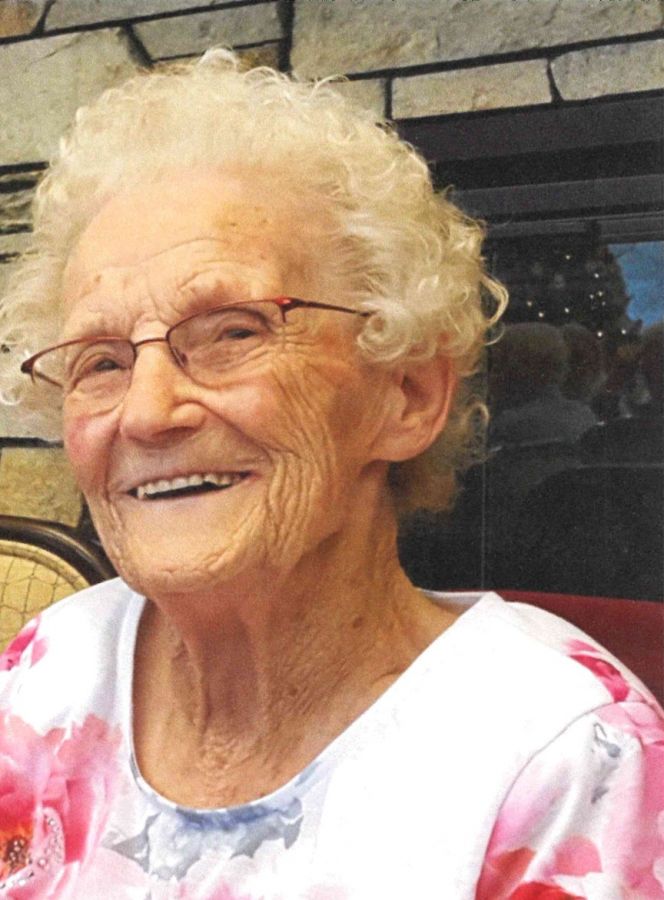 Ardis Darlene Arnold originally from Wayne County, passed away while in her daughters home in Prairie City, Iowa on February 2, 2021. Private family graveside services will be held at Bethel Chapel Cemetery. Memorials may be given to the Jasper County Elderly Nutrition or Unity Point Hospice. Condolences may be left for the family at www.coburnfuneralhomes.com


Ardis, the daughter of Clint and Grace (Keen) Marker was born on November 5, 1920 in Lucas County, Iowa. Ardis' mother died when she herself was only 15 years old. Therefore, she helped raise her much younger sister, Helen. Ardis graduated from Norwood High School, where she had played basketball. Two of her teachers, Irene and Virgil Starry, later taught in Allerton school. Ardis was united in marriage to Dean Arnold on May 19, 1938. They lived in Clark County for 5 years, then they moved to Wayne County, south of Allerton. There Dean farmed and they raised four children, Lois, Dewey, Diane and Steven. Ardis being a farm wife and mother worked very hard. There were always three meals a day along with gardening, canning, raising chickens, etc. It was nothing for her if an unexpected company showed up on Sunday for dinner. She would go out and catch a chicken, kill him, dress him and make the best fried chicken ever. Ardis was a country girl at heart and loved the simple things of Life. She was also a very caring and loving mother. She belonged to the "Friendly Farmers Club", a group of neighbors who got together to visit and do fun things. Ardis worked in Chariton at Gross Galesburg Sewing Factory making coveralls for nine years. In 1978, Dean and Ardis moved from the farm into Clio. Ardis worked at The WIndmill and Ruby's Restaurant in Humeston for 20 years. Dean and Ardis had celebrated 70 years of Marriage. After Dean's death, Ardis remained in Clio for a few years. Ardis never slowed down until her 99th year - not even a broken hip at age 89 could slow her down. One of the things Ardis enjoyed most was all the many trips to Branson, Missouri with her daughters. She loved country music and all the shows. She also was fond of the Saturday evening Lawrence Welk show on TV. Later she moved to Fort Des Moines Senior Housing where she made many new friends and enjoyed the activities. While living with daughter Diane, they delivered meals five days a week to the elderly. In their spare time they went to the ballpark or the gym to walk.

Ardis was preceded in death by her parents, Clint and Grace Marker; sister, Helen Letton; brothers, Ralph and Don, and Herbert Marker; husband, Lester Dean and her only granddaughter, Angela Dentler Tate. Ardis is survived by her daughters, Lois (Tom) Akers of Des Moines and Diane Arnold of Prairie City; her sons, Dewey (Cheryl) of Unionville, Missouri and Steven (Rita) of Corydon, Iowa; eight grandchildren and 14 great grandchildren.

"To the Arnold Family, Condolences on the loss of your mother. She lived a long and full life. We know she will be greatly missed by your family. We share many memories of living south of Allerton, as your neighbors. We grew up with the Arnold children and as farm families there, we all depended on neighborly help now and then. Our mother, Marylee Davis, and Ardis were both members of the Friendly Farmers Club. I remember the wedding shower the club gave for Lois, when they wrapped her up in a dress of toilet paper. Others memories are of Dewey and Jim yodeling messages to each other in the quiet evening air as they did chores; Ardis laughing while telling our mom that our Dad sneezed so loud when milking, that they could hear him at their house. Another memory was when Ardis sent Steve to our house after a snowstorm. It was a cold walk and our mother pulled Little Steve into the house stripped him of his wet clothes, wrapped him in a blanket and sat him next to the old pot-belly stove with a cup of cocoa. Quite embarrassed, he finely sheepishly said, ?Well! All I wanted was a cup of sugar.? Ardis later exclaimed, ?he wasn?t supposed to play in the ditches!? Grandson Ryan nominated our Mom and Dad for the Times Republican ? Neighbor of The Year Award,? which they proudly hung in their kitchen. We are saddened to hear of the passing of another member of that special era, and will always hold those memories dear. Sorry for your loss. Sincerely, Jim Davis and Avriel Davis-Koester"

"Condolences to all the families, I went to school with the kids, and wrote insurance for Dean later on. I remember Ardis well. "

"Dewey, and Cheryl, So sorry for your loss, it really is hard to lose a parent, and nothing ever fills that void. She lived a good long life, so that is really wonderful. Thinking of you and your family at this difficult time. God Bless you. Jerome and Carolyn Hoxton"