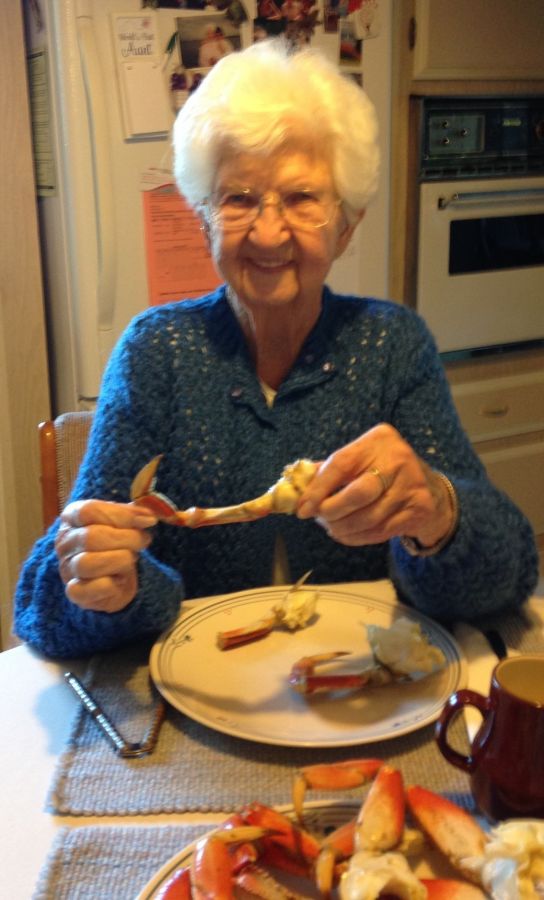 Janet Ellen MacKenzie was born Feb. 5, 1921 in Andover, New Brunswick, Canada, the youngest child and only daughter of Wallace and Jessie Ann McLeod. She passed away peacefully in her sleep on Nov. 16th, 2020 from congestive heart failure.
She grew up in Barker's Point, NB and moved to Montreal during World War II to work for RCA building radios for the Canadian Army. When the War ended, she returned to New Brunswick and then decided to move to Vancouver, BC because she wanted to see the mountains and a place where sometimes the roses bloomed in February. While in Vancouver she met Ian MacKenzie at a dance. They married June 28th 1947 and their two children were born in Vancouver. The family moved to Vancouver Island and then emigrated to the United States in 1962. They lived in the Los Angeles area but did not enjoy the big city so they decided to move and ended up in Junction City, Oregon. They later moved to Washington, settling first in Kirkland and then moving to Port Angeles after Ian's retirement. They were both outgoing, social people and loved being around friends and family. They enjoyed travelling and made three visits to Scotland where Ian was born. They purchased an RV and made many trips across Canada and the U.S. They spent many winters golfing and enjoying the sunshine in Hemet, CA.
Janet was a kind, gracious woman who was loved by everyone who knew her. She had a busy social life and was always ready for anything. At home, she loved cooking, gardening and hosting family and friend get togethers.
Predeceased by her husband, Ian, in 2010, she is survived by her son Dan (Leslie) of Quadra Island, BC; daughter Donna (Greg) Willis of Tacoma; granddaughters Danielle (Jason) Larson of Terrace, BC; Sarah Willis of Seattle; Lisa (Brent) Fitzgerald of Okanagan Falls, BC; and great-grandchildren Kai, Smith, and Maple. Also survived by nieces, nephews, and cousins in Canada, the U.S., and Scotland.
Due to Covid 19 restrictions, there will be no memorial service at this time.

"On behalf of our Dad and all the McTaggart family of BC Canada, we would like to offer our deepest condolences to all your family. Janet and our mother Madeleine (who passed away on Sept 9, 2020) were the best of friends for 72 years. They met while both working at Woolworths in Vancouver and were friends from that point on. Our family will always remember Janet for being such a loving, caring person and friend to our Mom and the family. She will forever be in our thoughts and prayers. Fred McTaggart, Lorraine Zanatta and all the McTaggart Family"

"Janet was kind and caring and a wonderful aunt. She always took such interest in us. I remember the time when Uncle Ian was very ill and in a care home in Port Angeles. She picked my two sisters and me up from the ferry and took us to the home so we could visit and she had arranged for all of us to have a picnic outside. Ian was able to sit outside in the sun and we all had a good visit. Then she took him back to his room to rest and took us up to see the views in the Olympic National Park. Later she drove us back for a short visit with Ian before taking us to the ferry. "