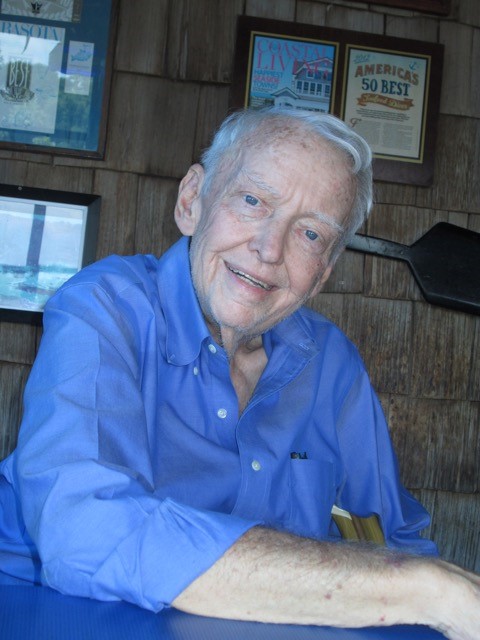 Victor G. Reiling Jr., 80, of Sarasota FL, passed away peacefully on February 1, 2021. He is survived by his wife, Nancy S. Bushnell. Formerly of Cornwall, Salisbury, and Kent, CT, he and Nancy moved to Sarasota FL in 2008.

He was born March 20, 1940, in Dayton, OH, son of the late Lillian S. and Victor G. Reiling. Eldest of five children, he was always called 'Pete' by his family members, including 31 first cousins, many Uncles and Aunts and nieces and nephews.

He graduated from the Chaminade Catholic High School in Dayton, OH and went proudly on to become a member of the class of 1962, 16th Company, at the United States Naval Academy in Annapolis MD. While there, he did numerous illustrations for the 'Log', and designed the class of '62 logo, which was used on the Naval Academy class ring, as well as numerous other items. Following his graduation, he did submarine training and then was sent to Vietnam, where he served on the USS John Willis and then on the Minesweeper, USS Woodpecker. He was sent to the language school in Monterey, CA, where he learned to speak Vietnamese and returned to Vietnam where he became involved in psychological warfare operations. He was next appointed Captain of the USS Woodpecker. He achieved the rank of Lieutenant, and was awarded numerous medals and citations throughout his military service.
In April of 1970, he retired from the Navy and started an illustrious career as a toy and game designer. He worked for Fisher Price, in Buffalo NY, where he designed many of their bestselling toys of the era, including the Castle, the Airport, the Houseboat and the Sesame Street Playhouse. He went on, as Victor G. Reiling and Associates, to work for many other toy companies, with a number of different partners, and was very recently coming up with more creative concepts on a daily basis. His game, 'Hot Potato', originally introduced in the 1980s, is still on the market.

Wherever he lived, Vic always became a willing participant in community activities. As a member of the Rotary Club in Salisbury, he helped to design a traveling gazebo for the local Salisbury Band, in which to play at outdoor events. He marched every year in the Memorial Day Parade in Cornwall and Salisbury and Kent and Sarasota. He decorated a statue of a dog in Kent CT for auction to benefit the local food pantry, and another in Sarasota FL for the benefit of the Southeastern Guide Dogs. While in Kent, he did weekly editorial cartoons for the Kent Good Times Dispatch, as well has helping to design the new Veteran's Memorial Plaza. His artistic talents knew no bounds!

He and his wife Nancy, had a wonderful life together. They met 33 years ago when he stopped at Nancy's gift shop, "Fun Unlimited' in Salisbury CT. to buy some Christmas gifts. Driving back and forth to New York City, where he and Nancy were members of an amateur Gilbert and Sullivan Society, the Blue Hill Troupe Ltd., or up and down the east coast to visit friends and family, and taking a number of cruises around the Mediterranean and up the Mississippi, they covered a lot of territory together.
Vic was also a member of the Military Officers Association of Sarasota FL, and served on the board as 2nd vice-president, responsible for arranging speakers for monthly meetings.

Vic will be buried at the Sarasota National Cemetery, and a Memorial service will be held in the future.

Memorial donations may be sent to Alzheimer's Disease Research at 22512 Gateway Center Dr., Clarksburg MD 20871, or to their website which is brightfocus.org/ADR.

"I'll always remember the pride with which Vic gave my family tours of his collection of toys that he had designed. So many of them brought back memories of my own childhood, and his demonstration delighted my young children. When we visited with him over meals at his sister Anne's, he always inquired about our personal interests, asking probing questions about what we did, what inspired us, and he undoubtedly had a story from his own life that made us feel welcome and connected to him. My father, John Lee, considered Vic a good friend, and often boasted to us about Vic's accomplishments. I know he will be sorely missed, especially by Nancy and Anne. Sending my most sincere condolences. "