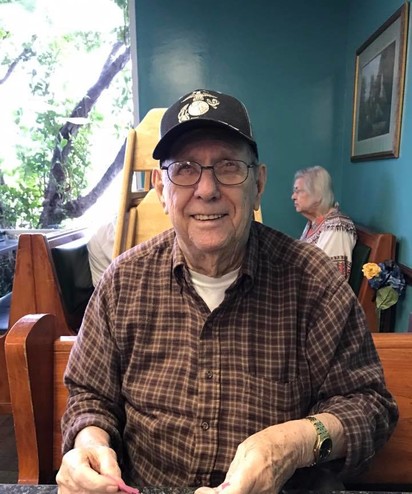 Charles Edward, 92, of Richardson, TX went home to be with the Lord on Saturday, February 13th. Charles is survived by his son and daughter-in-law Donald W. Stephens and Sandra A. Stephens of Richardson, TX, his daughter Patrice L. Stephens M.D., of Dallas, TX, his granddaughter Haley, great-granddaughter Jacqueline and many dear family and friends.
Charles lived an interesting and full life, serving his family, the church and his community. The only child of Charles A. and Vesta Mae Stephens of Texarkana, TX, Charles joined the U.S. Marine Corp immediately upon graduating Texas High School in Texarkana Texas. He married his high school sweetheart, Erlene Justus, and settled down in Texarkana after his service in the Marines. Charles worked for the U.S. Postal Service for 37 years, starting out as a clerk and working his way up to the Bulk Mail manager in Dallas, TX and finally as a national auditor, traveling around the country during his final 5 years with the USPS.
Charles was a faithful servant at Town East Baptist Church where he was a deacon and active member of his beloved church. He was a loyal and loving father, always actively participating in the activities of his children's lives. He was married to his childhood sweetheart for 68 years until the Lord called his beloved wife home in 2015. He lived out his final years in Richardson with his son and daughter-in-law where he was fond of weekly trips to his favorite diner followed by a visit to Half Priced Books.
Charles was very loved and will be dearly missed.