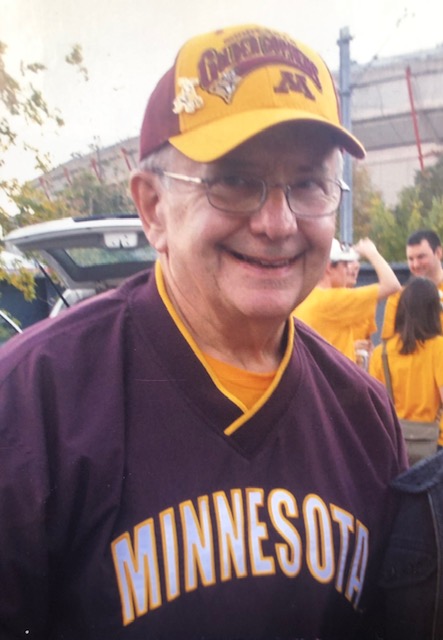 Glen was born in Milaca, MN on December 20, 1940. He went to the Milaca schools and graduated in 1959. He loved sports and played football, basketball, and baseball. After graduation, he worked in Minneapolis and enlisted in the service in 1963. After returning, he enrolled in Dunwoody Institute. Following graduation, he worked as a pressman at Northstar Computer Forms and eventually settled at Instant Web. He worked there for 25+ years, never missing a day of work.

He married Sandra in May of 1965. Though they grew up in the same town, they didn't start dating until they were both in the Twin Cities. After they were married, they eventually moved to Fridley where they purchased their first and only home and raised their family. They had two amazing children, Susan and Kevin.

Glen loved sports. For many years he coached youth sports in Spring Lake Park. He loved Minnesota Gopher football always predicting a win each Saturday. For many years had season tickets, each year hoping for a trip to the Rose Bowl. Always a Minnesota fan, you could hear him cheering for the Gophers, Vikings, and Twins.

His true passion was fishing. As a boy, he would fish from the Rum River. Glen didn't miss a Minnesota opening fishing weekend. Many memories were made with his close friends and family. His Canadian trips to Lac Des Mille had many memories that are still being told. Those legendary stories and his sense of humor live on at the campfires today. His two 30+ inch walleyes are the highlight of his fishing career.

His greatest love was his family. Over the years there were countless memories made with his in-laws, nieces, nephews, and grandchildren. The laughter, smiles, and timed shared with them meant the world to him.

"We are so sorry for your loss. Duane & Lorraine (Eggen) French."

"Sandy, Sorry to hear about Glen's passing. Will always remember watching the SLP games with you and Glen cheering Kevin and his friends especially the magical championship year. "

"Dear Sandy and Family Sending my deepest sympathies. We have so many wonderful memories of all the games we were at when the kids were growing up. It was great having you all in our lives. God be with you and and comfort you. Wendy (Muyres) Shavlik "

"Sandy, Sue and Kevin - We will always have great memories of Glen tailgating at the Gopher Games. Sending the family hugs and prayers. Julie and Jerry"