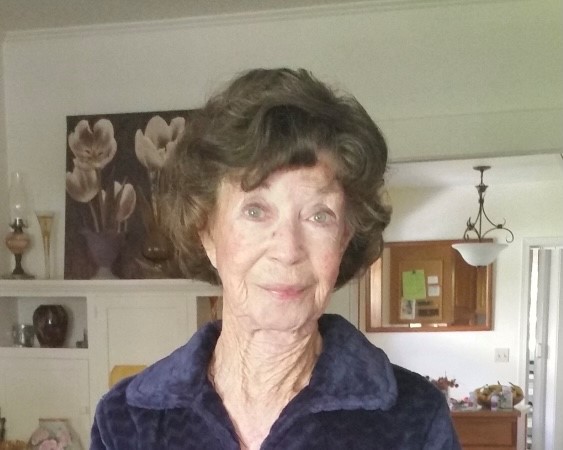 On Wednesday, March 10, 2021, Barbara Merle Robinson, a loving mother of two children, passed away at the age of 91.

Barbara was born on December 22, 1929, in Alturas, California to Ralph and Nera (Collins) Hill.

Barbara and her mother relocated to Idaho to live with her maternal grandmother and eventually relocated to Washington State. Barbara was adopted by Paul Campbell at the age of four and resided in Washington State until 1947. She studied ballet for thirteen years and was artistic and musically gifted. During her final year of high school she also attended Seattle Pacific University as a music major. She graduated from Edmonds High School, Class of 1947, and enjoyed numerous reunions with her fellow classmates through the years.

Having accepted Christ as her Savior, her relationship with Him provided peace and comfort through some very difficult years.

Barbara was married to her neighbor, Don Shoemaker, in January of 1948 and moved to Idaho (with .17 in their pocket) to live with her maternal grandmother again until the couple could get back on their feet and relocate to Washington.

Their son, David Charles, was born in Kirkland, Washington on November 29, 1948. It was in Tacoma in 1950 where Barbara was asked to step in as a contestant for the Miss Tacoma beauty pageant because one of the participants fell ill. Barbara performed a ballet number and sang a beautiful aria which resulted in her winning the title. Due to her having been married and with a young son, the title was relinquished to Rosemarie Bowe. Barbara always thought it funny that Rosemarie went to Hollywood and married Robert Stack.

Their daughter, Rebecca Lou, was born in Kirkland, Washington, on April 9, 1953. The family moved from the Seattle area to Wenatchee in 1958. In 1960, they moved to Oregon due to job opportunities. They moved to the Scholls community in 1961 and then to Pumpkin Ridge just outside of North Plains in 1964. Living on a small horse ranch in Oregon, Barby became a single mother and was forced to sell their home. With her son in the Vietnam War, she and her daughter then moved into a small apartment in Hillsboro. Continuing to direct church choirs, she also worked as a secretary, production worker, and medical assistant. It was while working with Dr. Harvey in Hillsboro, Oregon, she met and married Burton Robinson. Barbara cared for her new husband's mother for several years and then provided care for her own mother, who suffered a stroke, for the next 29 years. The couple lived in Hillsboro until 1980, when her husband's health and mother's failing condition resulted in moving to Phoenix, Arizona. She continued to provide care for her disabled husband and her mother. Barbara remained active in her church and worked as an executive secretary at Grand Canyon State Federal Credit Union.

Barby loved Arizona and her beautiful home, tending her flowers and beautiful yard. Her husband unexpectedly died in 1991 and her beloved mother in 1998. Barby continued to work at the credit union until she retired in 1996.

Barbara was gifted in music and sang for numerous weddings, funerals, and special occasions. She recorded several LPs and was honored to hear them play on local radio stations in the 50s and 60s. Barbara directed choirs for most churches she attended throughout Washington and Oregon. With a small choir of 17, she directed the Hallelujah Chorus one Easter at her church in Scholls, Oregon. She marveled for years how a small county church could produce such a wonderful cantata when only a few participants could actually read music. She was the director of the musical group, "The D' Notes" and the "New Image Singers" during the 70s and 80s. Her group was privileged to sing for the Portland Rose Festival, private parties, county and state fairs, and the Governor's home.

Barby loved horses and became proficient in showing Arabians to local fairs and horse shows. Her horsemanship resulted in numerous awards in the Portland metro area. Her artistic abilities resulted in paintings and watercolors that were greatly appreciated by many. One particular piece depicting three Arabian stallions was done for a local art show exhibit and won first place, later to be entered in a state-level competition and received high honors. Another favorite pastime was bowling. She had a unique style of lofting the ball as it slowly rolled down the aisle. She loved the sport and was quite good at it.

Barbara married Ken Griesser in 1996 and enjoyed their union until he developed a brain tumor and passed away in 2000. It was in October of 2004 that she decided to leave Arizona and return to Washington to live closer to her son in Carnation, and daughter in Oregon.

After being alone for many years, she reunited with her high school classmate Doug Caldart during a reunion. Barby's family had been very close to Doug's family in the 50s and 60s. Their friendship flourished in 2006 and they were married in December of 2007. Sadly, Doug developed a severe upper respiratory infection and died within a month of their wedding. They had purchased a home in Marysville and had been in the process of packing when Doug became ill.

In 2015, it was discovered that she had a defective heart valve. Her surgery in April corrected the value, but it was determined she also had other heart-related concerns. She was experiencing beginning stages of Alzheimer's disease.

In March of 2017, Barbara collapsed at church and was not expected to survive the night. Much to everyone's shock, she did and was ready to come home within the week. She loved her home, Red Hats group, playing cards with friends, and bowling in local leagues. She requested to stay there until God called her home. During the last several months, Barby was lovingly cared for during the day. Only until the beginning of February was care required 24/7. Her son and daughter spent several days and nights loving her until she contracted COVID-19 and died of pneumonia on March 10. Her desire was to be at home until her passing - and she was.

Barbara was well-loved by her friends, family, and co-workers. She was preceded in death by her mother Nera Campbell in 1998, brother Steve Campbell in 2001, husbands Burton Robinson in 1991, Kenneth Griesser in 2000, and Doug Caldart in 2008 Surviving are her two children, David Shoemaker (wife Myra), and Becky Loughridge (husband Jack), nine grandchildren, 10 great-grandchildren, and one great-great-grandchild.

She endured many difficulties and tragedies throughout her life, with grace, strength, and steadfast faith. She was known for her beauty, kindness, generosity, goodness, godliness, humor, musical talent, patience, charm, and love for others. She leaves the world a brighter place for her being in it. She taught us forgiveness, devotion, acceptance, celebration, freedom, fun, and courage. She had an endless supply of love to share. Her crowns will be filled with jewels as our Savior declares "well done, good and faithful servant."