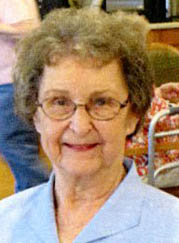 Anna Selmo, formerly of Milwaukee and currently of Hastings, Minnesota died Tuesday, April 6, 2021, at United Hospital in St. Paul. She was 92 years old. She was born on July 14, 1928, in Antigo, a daughter of Jordan and Hermina (Paulen) Medo.

She was a graduate of Antigo High School with the class of 1946.

As a young woman she moved to Milwaukee.

She was a homemaker. She enjoyed listening and dancing to polka music and was a member of several polka clubs.

She had a great love for all her family and especially enjoyed the time with her grandchildren and great-grandchildren. She was so proud of all of them.

The funeral Mass will be celebrated on Saturday, April 10, 2021, at 11:30 a.m. at St. John Catholic Church with Rev. Charles Hoffmann officiating. Entombment will take place in Queen of Peace Mausoleum.

Visitation will be Saturday at the church in Hoffmann Hall from 10:30 a.m. until the time of Mass.

"Farwell my Dear high school buddy. We had many great times over the past 70 years. You were my classmate, my room mate, my co-worker, my polka partner, my maid of honor, travel buddy and best friend. You will truly be missed."

"Annette, Shawn, and family, please know of my thoughts and prayers. Annette, I remember when you started at HFS and you said that if your mom ever needed any help that would be your first priority as she came first before anything else. You were such a loving daughter and how lovely that she could be in Hastings, near you, during her last years. My condolences and hugs!"