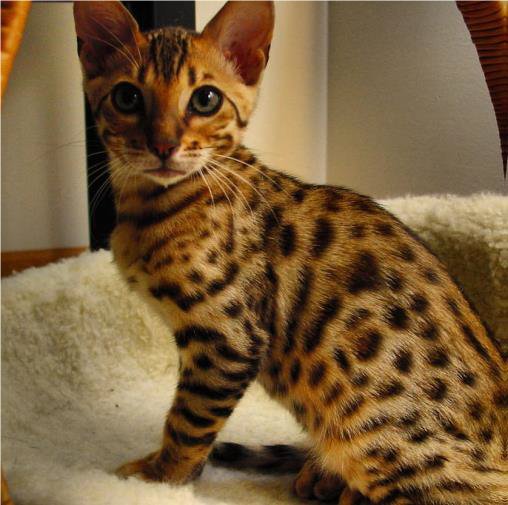 Caesar Headlee, Born in 2001 in Fargo North Dakota, his mother a Beautiful Snow Bengal, and his father a supreme grand champion. Caesar was 1 of 3 siblings, his two sisters took after his mother and were a lovely white, while Caesar took after his father with the traditional Bengal colors.
From day one Caesar loved his showers, the bathroom was his happy safe place. From just getting a drink of water to completely submerged, he LOVED the shower.
Caesar would welcome his family home daily with his loud roar, he was one of the most vocal felines on the planet, he loved to talk, some would argue he even learned how to say "Shower".
Caesar loved to climb and play catch and fetch, he was a great retriever, he could catch a flying mouse 16 feet in the air while hanging on his tree. While Caesar looked tough, he was a total softy, he enjoyed hanging out and cuddling with his human daddy. He was a bit skittish to strangers, but once he got to know you, he never forgot you.
Caesar knew when you were having a bad day, or did not feel well, he would give you a little extra love. He was always a companion. Caesar proved to be a real fighter, he survived beyond expectations, he had some real challenges in the end, including losing his vision, but he kept trucking on without slowing down.
On his last day, he was surrounded by his family, even when he was struggling, he was able to make it for one last shower, after that he knew it was time. Caesar was only a few months away from his 20th birthday when he passed, he will be missed like no other.