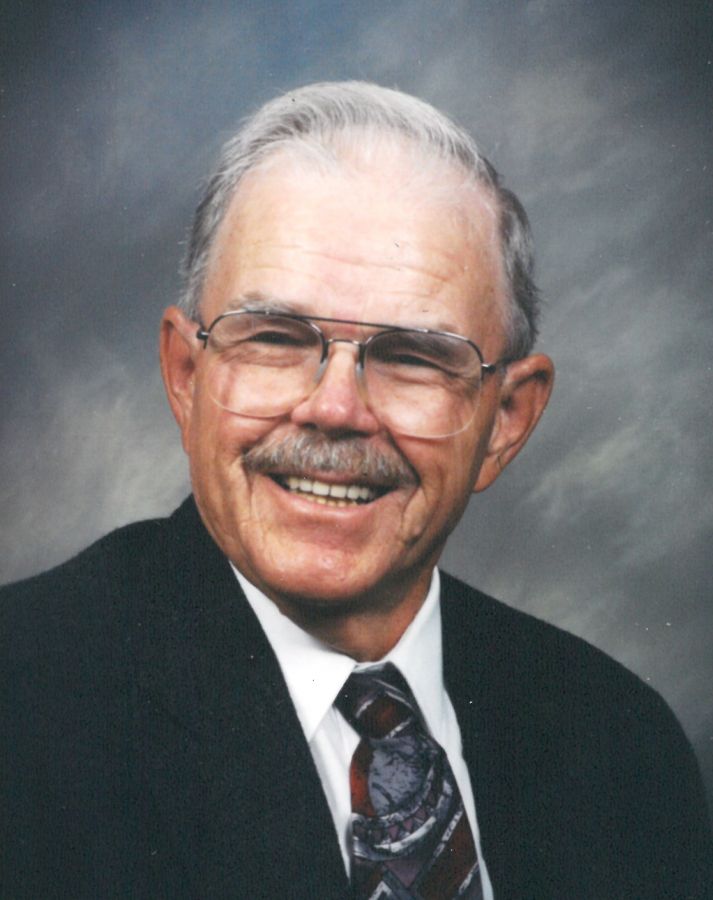 Richard Dean Warren age 90, of Ames, Iowa passed away at Israel Family Hospice House on April 23, A gathering of friends and family will be 4-:6:00 p.m. Thursday, Apr 29, at Grandon Funeral and Cremation Care, 414 Lincoln Way, Ames, A funeral service will be 1:30 p.m. Friday April 30, at Calvary United Methodist Church, 1403 24th Street, Ames. Burial will be at Ames Municipal Cemetery.
Richard was born on December 4, 1930 in Cambridge, Iowa the son of Raymond Wesley and Gladyce Ruth (Zook) Warren. He graduated from Milford Consolidated School in 1948. He married Shirley West on June 22, 1952 in Story City at Grace Church. He completed his degree at Iowa State University in Animal Husbandry. Richard was a member of Alpha Gamma Rho fraternity while at Iowa State. Richard and Shirley moved to Eldora where he started his teaching career. Then the couple moved to Elkader where he spent four years working for the Extension Service and raised Black Angus cattle before returning to Iowa State University to further his education in Sociology and Statistics while living at Pammel Court. He obtained his Masters and Doctorate degrees from Iowa State University. He then became a professor of both disciplines at Iowa State University helped 500 graduate students with their thesis and getting their PhD. Richard was asked to become the first Director of RISE (Research Institute for Studies in education.) He retired in 1992. He was a distinguished Professor Emeritus.
Richard loved his family and Lord. Richard loved fishing trips to Canada with friends, gardening, and many different woodworking projects. He loved golfing at Veenker Golf Course, where he made a total of 3 holes in one over his golfing career. He enjoyed going to his grandchildren's many activities. Richard loved spending time in Florida in the winter to escape the cold weather in Iowa.
Richard will be missed by his wife Shirley Warren, son and his wife, Allan and Mary Warren, daughter and her husband Robin and Mark Barnett; grandchildren, Joan and Russell Sherwood, Douglas Warren, Jonathan Hartley, and Christopher Hartley; sister Ruth Paulsen. Richard was joyfully awaiting his first great grandchild to be born in August.
He was preceded in death by his parents, a brother John Warren, and sister, Juanita Behm.
Memorials may be directed to: Dr. Richard and Shirley Warren Scholarship fund at ISU and or Calvary United Methodist Church
Online condolences may be directed to: wwwgrandonfuneralandcremationcare.com

"Dick had a major influence on the department and many, many students. He led an exemplary life and career. I am sorry I was not in town and missed the services. Paul "

"To the family and friends of Richard 'Dick' Warren, PhD, It is with a heavy heart and taxed mind that I find the words to express and show respect for the passing of Dick. My thoughts and prayers are with each of you at this difficult time of closure. May a candle always remind you of the wonderful memories and many blessings Dick and Shirley provided. He was a Sr the first year of my 4-H experience and during my 4-H years I enjoyed his sisters, Juanita'50 and Ruth'54, and spent much time in the Warren home, since us girls were in both the Milford Merry Maids and the Milford Hustlers 4-H Clubs, working on demonstrations, etc. Dick was in the Milford Consolidated School Class of 1948, of seven; 5 girls and 2 boys, he and Bill Allen. His demeanor, and kindness were as notable as his intellect and close nit family. He was one of three Milford Township youths, who grew up about 10 miles from Ames, and become notable Iowa State professors , Dick'48 and Gordon Bivens'44, were both names Iowa State Distinguished Professors in 1983 and the other IS icon, Charles F Curtiss, the Dean Curtiss. They were certainly an important part of the pride for our desire to write the book, "Milford Twp, And Proud of It!" RIP, Dick, until we all meet again. God's Peace and my love to each of you, Milfordite, Jurine Borton Moore, Class of '56 and Co-Author of the Milford Twp book with Dale Hughes'55. P.S. I will send a Memorial in Dick's honor to the Iowa 4-H Foundation Fund. "

"I met Dr Warren when I was a graduate student in Sociology workign for him in the Fall of 1974. I quickly came to learn Dick's steady and thoughful approach to research and lots of other things. His humor was always a great joy to me and other graduate students. I still remember that first Saturday morning at 8AM in Snedecor Hall for the first graduate statistics class. I wondered, quite loudly to all, "Who thought THIS was a good idea?" Dick smiled and replied, "I did." How right he was! Working with Dr. Warren for the 2 years I spent in Ames was one of the most rewarding things in my graduate career. His thoughtful insights into research and analysis was something I carried with me throughout my entire career. I know there are probably thousands of other students who feel as privileged as I was to work with him. Bob Kominski MS ISU 1976 US Census Bureau (ret) "

"I am so sorry for us all at this time. Dr. Warren was one of the top people who influenced my career and also showed how career and family worked together. He first taught me in Stat 401 and at that time I learned I really could do and understand statistics. Later I worked in RISE and gain an understanding between data and understanding the data. Later he served on my Ph.D. committee. I remember his sense of humor showed after my oral examination. When I came back into the room Dr Warren said, "Well you passed, but it was close 3-2". I consider myself amazing lucky to have such as great man influence my life. Bob Crawford"

"All of you have my deepest sympathy in your great loss. As Dick's youngest sister, I have so many fond memories of our lives growing up on the farm. From Dick hitching up our pony and taking us for pony rides in a cart or pulling us on a sleigh , then to the hard work of him pitching a load of bundles on the hay rack for threshing while drove the tractor to the next shock. I always felt so protected by him. Dick was such a wonderful example and role model in so many ways. Many memories of his being an outstanding student, teacher, professor and researcher with many achievements. He led a dedicated Christian life. He loved his family so dearly enjoyed being a husband, a parent, and a grandparent. He was so looking forward to be a great grandparent. I was very blessed to have him for my brother and he will hold that special place in my heart forever. I have a flood of memories of many happy times. Much love, hugs and prayers to all of you."