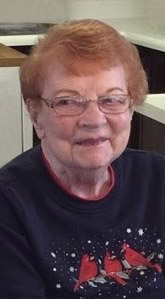 Adell Irene Eustice, a retired Franklin County assessor, superb pie baker and a crossword puzzler to the end of her 94 years, died Tuesday, May 25, in the Franklin Country View Nursing Home in Hampton.

Adell was the last Eustice, a family that had lived in Franklin County for more than a century.

A funeral will be at 10 a.m. Monday, June 14th, at Sietsema Vogel Funeral Home in Hampton with burial to follow in Hampton Cemetery. United Methodist Church Pastor Lewis Flanigan will officiate. Visitation will be 2 to 4 p.m. Sunday, June 13th, at the funeral home.

Adell was born Jan. 9, 1927, in Ross Township, Franklin County, to Carson and Martha (Carner) Eustice. She was raised on a farm in Hansell and graduated from Hansell High School in 1944.

She worked for a year at the hemp plant in Hampton and had positions with Harrisons, Northwestern Bell and First National Bank. Adell was hired on the last day of 1948 for a monthlong position in the Franklin County Auditor's Office -- but lasted 40 years in the courthouse. Both quick, and quick-witted, she wound up in the Assessor's office, was appointed deputy Assessor in 1978 and was named Franklin County Assessor in 1981. She retired in 1989.

The lifelong Franklin county resident was a member of the Hampton United Methodist Church.

In her "spare" time, Adell was a champion bowler along with her sister Beryl Eustice, in younger days. She found adventures at home, putting up bicyclists for two RAGBRAIs, and abroad, traveling to Europe as well as various parts of the U.S.

Adell was a consummate caretaker, helping her parents, uncles, an aunt and her sisters to the end of their lives. Her nieces and nephews, then grand nieces and nephews, visited her home year after year -- maybe those raspberry pies and potato bud chicken kept them coming back. She helped teach one or two of them to ride a bike and demonstrated at least one the "proper" way to do laundry. Into her 80s, she mailed packages of homemade cookies and her special cupcake brownies to her nieces and nephews at Christmastime.

She enjoyed volunteering as bookkeeper for the Franklin County Historical Society and also volunteered at the society's museum, where pieces from the Eustice family are on display.

She lived independently until age 91. And, even after she moved to the nursing home, Adell would walk with her cane down to the lobby where she would do her daily crossword puzzle and chat with fellow residents.

She was preceded in death by her parents, Carson and Martha, and sisters, Marian Todd, Gerry Eustice, Beryl Eustice and Virginia Neubauer.

In lieu of flowers, memorials may be given to the Salvation Army or the Franklin County Historical Society.

"I remember Adell hosting the courthouse Christmas cookie exchange. It was so much fun and a great assortment of treats. What a great lady! ?? Kathy Heilskov "