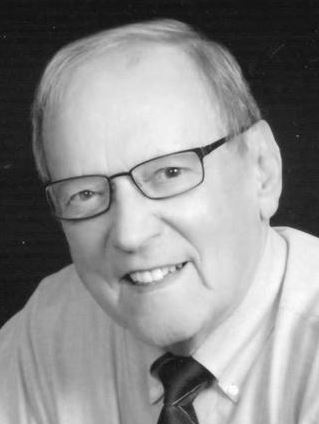 William (Bill) D. McNeil, 91, of Rochester, died on Saturday, June 5, 2021. Born February 26, 1930 to Ruby (Denham) and Duncan McNeil in Minneapolis, he graduated in 1948 and enlisted in the US Naval Reserves in 1949. He spent two years active duty on the battleship USS Iowa. In 1953, he married Patti and entered the University of MN earning a BS in Electrical Engineering and MS as a Research Fellow. In 1969, he was offered a job with IBM in Rochester in the field of optical character recognition and was the author of several US Patents. He retired in 1994. After Patti died, Bill moved to The Homestead where he met Marge Cash, who became a loving companion and his caregiver during his final months of life. Bill volunteered with Habitat for Humanity. He enjoyed golf, downhill skiing, biking and windsurfing into his 80s. He also loved playing hymns and old-time favorites on his guitar. At the Rochester Senior Center, his passion for ping pong was born. He was active in Rochester's Korean War Veteran's Association and the Veteran's Association of the USS Iowa. He will be remembered with a smile for his corny jokes and play-on-words, his genuine interest in others' stories and most of all, for being a man of God with his kind, caring heart.

Memorial service will be held September 18, 2021 at 2:00 p.m. at Ranfranz and Vine Funeral Home, Rochester, MN with visitation one hour prior to the service. Interment will be at Fort Snelling National Cemetery. Memorials preferred to Mayo Clinic's Alzheimer's Disease Research Center 800-297-1185 or www.philanthropy.mayoclinic.org/alzheimers