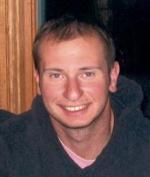 David Behrle Services: 2 p.m., Tuesday, May 29, Tipton Middle School, Tipton. Visitation: 3-7 p.m., Monday, May 28, middle school. TIPTON, Iowa -- David William Behrle, 20, of Tipton, died May 19, 2007, in Iraq, due to injuries sustained in Iraq. The Revs. Eugene Benda and David Hitch will officiate. The Military Honor Guard will serve as pallbearers. Burial will be at the Woodbridge Cemetery in Tipton. Military graveside rites will be conducted at the Woodbridge Cemetery. A memorial has been established for the "bleacher repair" fund for the Tipton Community School. Mr. Behrle was born March 6, 1987, in Iowa City, to Johnnie Ray Behrle and Dixie Marie Jedlicka. He was a 2005 Tipton High School graduate and an infantryman in the U.S. Army. He was a member of St. Mary's Catholic Church in Tipton. He is survived by his parents, Dixie and Dennis Pelzer and Johnnie Behrle of Tipton; two sisters, Jill (Tim) Chambliss of Tipton and Kellie Behrle (Curt Jeffries) of West Branch; a brother, Jonathan (Amy) Behrle of Homestead; two stepbrothers, Anthony and Andrew Pelzer of Iowa City; a stepsister, Adelena Pelzer of Chicago; a niece, Jaidyn Behrle; three nephews, Jonathan and Jacxon Behrle and Colin Chambliss; and grandparents, Kenneth and Twyla Jedlicka, Martha Behrle and Richard and Theresa Pelzer.