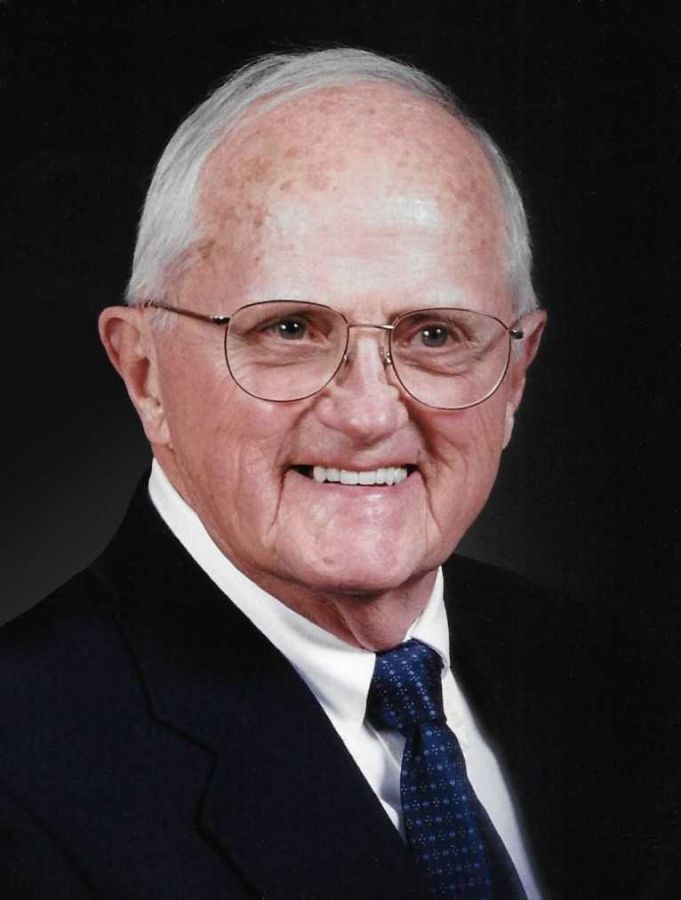 Charles Ellwood Smyrk, Jr. passed away July 15 at Season's Hospice House in Rochester Minnesota. He was born in Baltimore, Maryland on March 21, 1928 to Flossie Christopher and Charles Ellwood Smyrk, Sr. Given the nickname Bucky by his father, many in the East knew him as Buck or Bucky, but he became known as Charlie after settling in the Midwest.

While working as a handyman at a Girl Scout camp Charlie got his first glimpse of the woman who would become his wife of 70 years, Carol Trumbo Smyrk. Carol and Charlie married in 1951 and started a family of four children.

While still in high school, Charlie enlisted in the navy and served as a weatherman during World War II. He was stationed stateside and spent most of his time in Virginia, New Jersey and Washington, DC. In recognition of his service, Charlie was able to return to Washington on a Freedom Honor Flight in 2011. Traveling with him was his lifelong friend and fellow WWII veteran, John Leimer.

After the navy, Charlie entered the University of Maryland as a music major. Soon realizing he did not have the patience to become a music teacher, he changed his course of study to engineering which led to a career first at Westinghouse Electric and then at IBM. In 1967 Charlie was part of an IBM team that developed the first optical scanner capable of reading handwritten numbers.

All IBMers know that IBM stands for "I've Been Moved" and true to form Charlie moved his young family from Baltimore to Endicott NY, then to Vestal, NY, then to Catonsville, MD, then to Yorktown Heights, NY and finally to Rochester, MN in 1964. Once in Rochester, Carol said, "enough already" and they remained in the same home until 2 days before Charlie's 93rd birthday.

Charlie's love of music did not end in college; he sang in the choir of the First Presbyterian Church, was a member of The Robert Oudahl Chorale, and had a role in the Rochester Community Theater presentation of "A Little Night Music". For many years, he enjoyed singing baritone with the Gemini Crickets Barbershop Quartet. Along with Myron Snesrud, Don Werthman, and Rod Johnson the Gemini Crickets were internationally recognized for their harmonious voices and their unique blend of humor. In 1971 the group spent 17 days entertaining hospitalized service members as part of a USO tour in Japan, Guam, and the Philippines.

After retiring from IBM in 1983 Charlie and Carol did a lot of traveling and learning together at Elderhostel's across the United States. Their international trips included Costa Rica, Panama, Scotland, England, Germany, and France. Many of those trips were shared with their good friends John and Joan Leimer (also of Rochester). And every February from 1980 through 2019 Carol and Charlie enjoyed spending time with their children and in-laws Charlie and Shirley Trumbo in Pass-a-Grille, Florida.

In addition to music and travel, Charlie was a lifelong fan of the Baltimore Orioles and was an early convert to live-streaming so that he could watch every game. He loved to play golf, bowl, play bridge, read, and solve crossword puzzles. He had a brilliant, curious mind and was always starting new (and sometimes short-lived) hobbies such as ice skating, sailing, gardening, playing the banjo and learning to play the trombone.
Charlie was a pretty good golfer, shooting his age more than once while in his mid-70's. But his short game, never a strength, did not age well. His amazing repertoire of flubs, tops, chunks and shanks around the green became known to his family as "Charlie's Chips." Eventually, he decided that his free time was better spent volunteering. He was treasurer of the St. Mary's Hospital Auxiliary, delivered Meals on Wheels, and, at the age of 85, provided transportation for those "seniors" unable to drive themselves to their medical appointments. In 2012 he received The President's Volunteer Service Award signed by Barack Obama.

Sadly, Charlie's brilliant mind became a bit muddled during the last few years of his life, but he never lost his sense of humor, his love of family, or his respect for those providing his care.

Ranfranz and Vine Funeral Home is honored to be serving the Smyrk family; to leave a memory or condolence please visit www.ranfranzandvinefh.com.

"Very sorry to be this late with a tribute to Charlie...what a great guy! I was blessed to know Charlie and family and especially Dave who I considered my closest friend back in those Central Junior High days in 1966 and 1967. My sincere sympathy to Carol , Dave, Tom, Lynn, Tim and the extended family. John Whelan"

"I worked with Charlie for a short time before his retirement and then saw him occasionally "on the desk" at St. Marys. I have thought of him many times through the years. He was a lovely man, as you all know."

"Dear Carol and family, So very sorry for your loss of your "STAR", sending lots of hugs and love Carol!!!!"

"Carol, I'm so sorry for you and your family at Charlie's passing. My prayers go with you in your sorrow. Sue McMillan"

"Carol, you and your family have my deepest sympathy. Your PEO sister, Janet Johnson "

"Your wonderful memories of Charlie will keep him close to you. My thoughts are with you at this time of sorrow."

"He is fondly remembered by nurses and patients for his patience, kindness and smiles. We looked forward to evenings that he was there. I loved hearing about his old English sheepdog. I will miss him. Vince Ready"

"Dear Dave & Donna, please know our sympathy at this time. God has taken your dad home and left you with so many memories to cherish. Love, hugs & prayers from Nany & Tom"