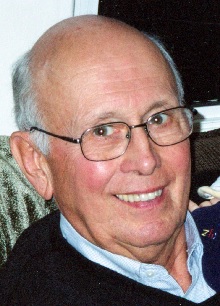 Richard "Dick" Mohrbacher, 91, of Maple Glen, PA, passed away on July 15th at MonteCedro Retirement Community in Altadena, CA. Dick was an accomplished medicinal research chemist, an active member of Saint Alphonsus Church, a family man, and a philanthropist. He was born on October 25, 1929, to Frances and Joseph Mohrbacher of Belle Plaine, MN, the youngest of two. He graduated from Belle Plaine High School and then received a bachelor's degree from the University of St. Thomas in St. Paul, MN, in 1951. Four years later, he earned a Ph.D. in Chemistry from the University of Nebraska where he also met his future wife, Barbara Berggren, a student in a class for which he was a teacher's assistant.

Dick worked most of his career for McNeil Consumer Pharmaceuticals in Fort Washington, PA, a subsidiary of Johnson & Johnson. His research earned 46 patents and was covered in dozens of scientific publications. A compound he helped create went to market as the product Raticate, and he also contributed to the development of the cancer-prevention drug Fenretinide. He took satisfaction in dedicating his professional life to the development of medicines that could ease human suffering. He sometimes quipped that he loved his job at McNeil so much that he would pay them to do it.

In his retirement, his faith and his generous spirit led him, with the help of his wife, to help found and administer a scholarship fund through Saint Alphonsus to help needy inner-city children attend a North Philadelphia Catholic school. He also managed a parish program that distributed good used furniture to disadvantaged families in North Philadelphia. Closer at hand, he helped organize and expand the Upper Dublin Township youth baseball league, first coaching boys' teams and then girls' softball teams for many years.

Dick was an athlete and an avid outdoorsman who trained his own pointing dogs and shared his love of small-game hunting with friends from every walk of life. He instilled his love of the outdoors in his children with summer camping trips to national parks all over the country, from the Boundary Waters of Minnesota to Virginia's Shenandoah Mountains to the Wyoming Rockies.

In his youth, Dick's taste for adventure took him to Idaho during his college years as a member of Civilian Conservation Corps and also to Holland where he helped prepare dikes damaged in the North Sea Flood of 1953.

When he and Barbara had mostly finished raising their four children, they welcomed the Jensen brothers into the family as young teens in the foster care system. Becoming a grandfather suited Dick well as he and Barbara instituted a summer tradition known as "Camp Grandma," a weeklong visit in which five grandchildren were kept busy and entertained from morning until well past their bedtimes.

Frugal with himself and generous with others, Dick was a kind, gregarious, hard-working person who sincerely tried to live his Catholic faith. To those who knew him, he was the center of fun. To reminisce about him is to begin to laugh.

Funeral Mass at St. Alphonsus Church and interment in St. John Neumann Cemetery is planned for June 18, 2022. To receive service updates please click on the "Get Notifications" link at the top of this Obituary page.

Memorial donations to the Nature Conservancy are appreciated by the family.
https://www.nature.org/en-us/membership-and-giving/donate-to-our-mission/other-ways-to-give/honor-and-tribute-giving/

Share photos, tributes, and get service updates at www.UrbanFuneralHome.com