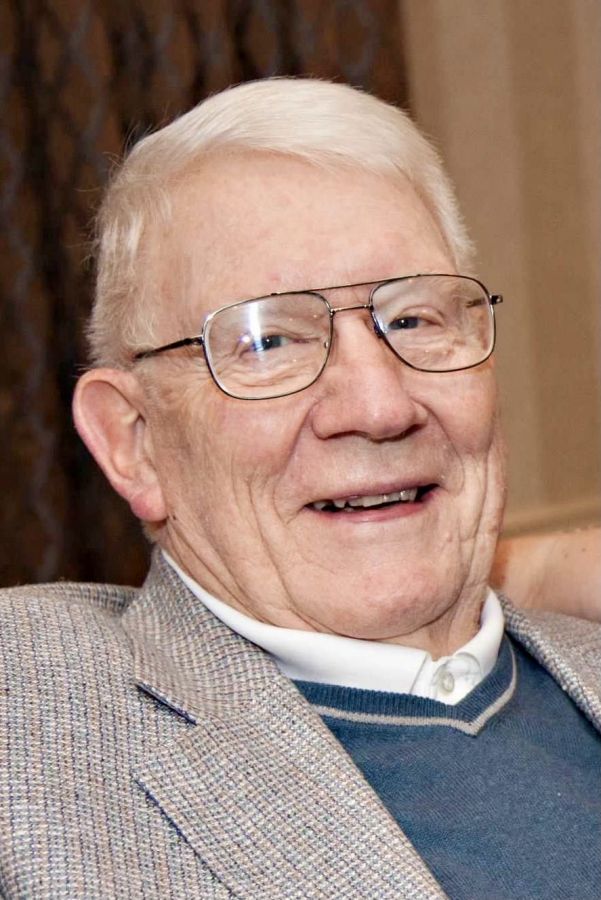 Don was born on December 28, 1932 in Vermillion, Ohio, to Henry and Clara Emmerich. The third of four children, Don attended Vermillion High School. Upon graduation in 1950, he went to Saint Joseph College in Rensselaer, Indiana, for one year before enlisting in the Navy. After a four-year tour that included visits to many of Europe's most beautiful cities, Don received his honorable discharge and re-enrolled in college, choosing to attend John Carroll University in Cleveland, Ohio. This proved to be an auspicious decision. Not only did he earn a university degree from JCU he also met his wife, Ann, whom he married in 1958 and enjoyed 61 years of marriage before Ann's death in 2019.

Don started his career working for Blue Cross Blue Shield in Cleveland before taking a job with Colgate-Palmolive. In 1962, Don moved his wife and family, which included three young children at this point, to Lansing, Michigan, and eventually Okemos, Michigan, to sell leather goods, mostly wallets, for Prince Gardner. Don travelled by car with his trusty samples in tow, developing relationships with customers, big and small, in almost every corner of the Great Lake State. During this time his family grew to six. After, in his words, "bouncing my @$#% all around the state of Michigan," for more than a decade Don transferred in 1973 to the Detroit area, where he could be home every night. He settled in Grosse Pointe Park and lived there until 2001, when he and Ann retired to Naples, Florida. He lived in Naples for 20 years, enjoying the gorgeous weather and living life to the fullest, before moving back to Grosse Pointe this past year.

A devoted and loving husband, a terrific Dad, uncle, and grandparent, a big-hearted and loyal friend and a man of deep Catholic faith, Don was always there for anyone who needed him. He became involved in every parish he belonged to, lent his time to numerous Catholic charities, coached little league, and never missed a big moment as his children grew up. Don's family and friends will always remember his gregarious nature, and the way he cried at weddings and graduations. And to know Don was to know the ups and downs of the Michigan State Spartans.

In lieu of flowers, memorial contributions can be made to Eternal World Television Network (EWTN), www.ewtn.com/donate or Lustgarten Foundation, www.lustgarten.org/donate/

"Mr E. has been so very special to me since Peggy and I became the Bestest of friends in H.S. Mr. E was like a second Dad and I miss him so much already!!! My favorite way to spend my time was with the Emmerichs!! (Still is?). The love, laughter and memories we?ve all shared will always remain in my heart forever??????????"

"I'll always remember Uncle Don's laugh and his passion for sports. Even though his teams were our rivals he always sent me texts during the Buckeyes games with encouraging words. I will miss those texts. We didn't get to see Uncle Don and Aunt Ann much after they moved to Florida, but have so many fond memories. Like the time I stayed with your family in Michigan, and how chaotic bedtime was (having grown up in a house of just 2 siblings) Being older than you I was privileged to share a root beer float with your Dad after you all went to bed. A favorite one was the time your parents visited us in Westlake, and we left your Dad to watch tv while we went out. Our dog Muffin held him captive in the recliner until we got home! Like my mother your Dad was a good sport when it came to dogs. At least those belonging to others. Joe found him to be so welcoming and easy to talk to. Your Dad was always concerned about how Katie and Joey were doing. I always thought it was so great how he made waffles and was a true partner to your mom. He and my mom were so alike, and he was so faithful in calling her in her last year. But then he was her brother and the bond was close. .He will be missed by so many, including us. May you find comfort in all the memories and love shared."

"Uncle Don was my Uncle and a friend. When we lived near them in Grosse Pte., we developed a special relationship that I will always cherish. Bill and I admired both Uncle Don and Aunt Ann for the values they instilled on the family. He was ready to be with Aunt Ann, mom, Uncle Mike and all the special people in his life. We?re so grateful to have had such a wonderful man in our lives. God bless you Uncle Don. "

"My first real memory of Uncle Don was when he volunteered to babysit for my mom one evening. He must have really been trying to make points with Ann who he was dating at the time. When we discovered it was Don a cheer went up by those of us that knew what a push over he was? just jumping on the beds and yelling ? it?s Don, it?s Don!? As my mom escaped through the front door. I kind of picture that same scene at his arrival in heaven. Aunt Ann, my mom And dad, and Grammy Butler all shouting with joy ? It?s Don, It?s Don, It?s Don!!!? Such a wonderful man, husband, father, uncle, and Spartan fan. He will be so missed by all. "