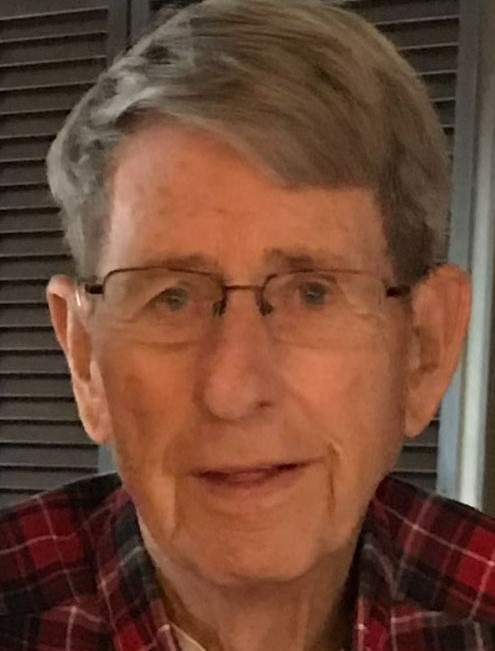 Bill was born on a farm south of Collins, Iowa on July 18, 1932. Bill was the last son of Fay and Florence (Bates) Hand. He had 7 older brothers and two younger sisters. Bill graduated from Collins High School in 1949 and worked at R.H. Donnelley Corporation until he joined the U.S. Navy in 1951. Bill served in the Navy from 1951-1953. He was honorably discharged at the end of the Korean War. There were 74 years of naval service amongst his brothers. Bill graduated from Simpson College in 1957. He would later earn his Master's degree in Education at UNI in 1969. It was at Simpson College that he met the love of his life, Shirley (Rydberg). They were united in marriage on June 5, 1959, in Essex, Iowa.

Bill and Shirley were a great team. They raised four very active boys and although there were a few broken bones and stitches along the way, they did so successfully. Leading by example, Bill showed the boys how to be great husbands, fathers and grandfathers.

Bill loved talking sports with the boys, or just about anyone! When his sons were playing high school baseball and he was coaching them, they would all come home after the game, gather around the kitchen table and rehash every single play of the game. In the meantime, always attentive Shirley, kept the Totinos pizza's flowing to the table. A sport he learned later in life that he thoroughly enjoyed, was golf. He and his buddies had a regular group on Thursdays and he was lucky enough to get two hole in ones during his golf career!

When the grandchildren started arriving, this is when a different side of Bill came out....a playful side. Always the educator, he would take whoever was staying with Grandma and Grandpa (which happened frequently!) down to his garden to help him pull weeds or pick peppers or tomatoes and teach them a thing or two about gardening. The grandchildren loved helping him pick raspberries also, and if they did a good job, a quarter or two or three would soon be in their hands. After some hard work in the garden, the grandkids would scurry to get up onto his lap for a ride on the riding mower. As the grandchildren grew older he would showcase his expert wine making skills and offer a glass of his Squaw Creek Raspberry wine along with his Prime Rib special at Christmas time.

Bill was an avid reader. He would often take the grandkids to the library to pick out books when they were on one of their visits. Recently, for Christmas, each grandchild picked out a book for him to read as their present to him. He had all the books read by the end of January! Therefore, in lieu of flowers, the family is asking memorials be made to the Hampton Library in honor of Bill and his passion for reading.

"Condolences to the entire family and all of Bill's loved ones. I went to school in Clear Lake, IA; and Bill Hand's reputation as an excellent coach, teacher, and all-around great person reached my school since our sports teams played Hampton. Sending love, Jeff Hansen"

"Dear Lon, Doug, Scott and Kevin - Our deepest condolences go out to each of you and all your families. Your father was such a wonderful man, someone I deeply admired. I respected his love of education and his devotion to family. He always had a kind word for me, and showed genuine interest in me, Hollis and Spencer. He will be deeply missed. I wish I could have made it to his memorial service, but am in Sarasota and won't be able to attend. Much love to you all, Mike Jones "

"I have so many wonderful memories of time spent with Bill and Shirley. Mr. Hand was my basketball coach in Junior High through High School. Shirley was always there supporting us. From Lonnie to Kevin I spent many hours babysitting the four boys witnessing how much they loved their boys. Bill was one of my favorites. You have my sympathy."

"A kind soul and a class act. Fond memories of him as a teacher and a coach. "

"He was a favourite teacher of many! So kind and patient. RIP"

"He was my all-time favorite teacher/coach! Wonderful man! I am sorry for your loss."

"Sorry for your loss! Cherish your many memories!!"

"Bill was a great man, teacher and coach. He came up me at our 50th class reunion and shared one of his personal memories of me playing baseball for that I really appreciated that I was the only player in his history of coaching that hit home runs both left and right handed. I never knew that. I played many rounds of golf with him and enjoyed his company. God bless ? him and his family. John Zimmer "

"I played basketball for an opposing girls' baske ball team, 1964 ? 1968. Hampton-Hansell Bulldogs usually beat us every year. But I have never forgot Coach Hand. His demeanor, character made an impression on me & I carry that remembrance to this day. He was always ?1st Class? "

"My deepest sympathy to all of the Hand families. Sharing a driveway with Bill and Shirley for 36 years meant we had the best house in Hampton. They were the greatest neighbors ever!! Patti Dennis"

"I?ll always remember my loving aunt and Uncle Bill and Shirley I always enjoy it when they came to California to visit my dad who by the way looked just like uncle Bill. I will always be thinking of them."

"Condolences to the Hand family. Many good memories at the Middle School and coaching baseball with Bill. He was a good man."

"Remembering Bill fondly but even closer to Lonnie and Scott of the Infamous Hampton White Sox Lonnie on the mound and Scott at Short. Sorry for your Loss. Neal Tapps"