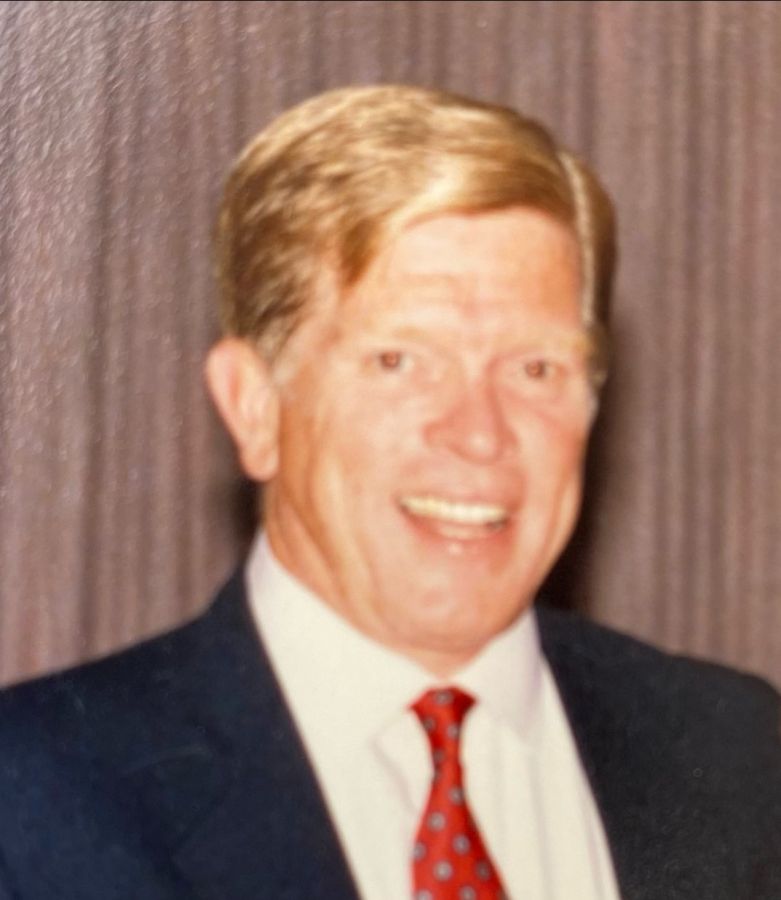 Guerry Brown McNabb, 84, passed peacefully away on Sunday, August 29, at Robbinswood - Northcrest in North Muskegon. He was born in Ft. Wayne, Indiana, the third of Dr. Paul Thomas and Carolyn (Brown) McNabb's five children. After graduation from Ft. Wayne's South Side High School, he attended Indiana University in Bloomington, where his B.A. in Economics led to a Swedish-American fellowship for post-graduate study at the University of Stockholm. Upon returning to the U.S., he began military service as a 2nd lieutenant in the U.S. Air Force, stationed at Wright-Patterson Air Force Base in Dayton, Ohio, and continued in the USAF Reserve as a captain until 1965.

At Christmastime, 1962, he married Joyce Anne McNamara in Eaton Rapids, Michigan, a marriage that lasted 33 years. Four children were born to the couple, and he is survived by daughters Caroline McNabb (Gregory Dunham) of Huntington Beach, California, Paula Susanne McNabb and Lizabeth McNabb (Bradley Mitchell), both of Costa Mesa, California. Tragically for the family, son Tyghe McNamara McNabb, Liz's twin brother, was lost to lymphoma in December, 1996, at age 25. Now there are grandchildren Abigail Dunham, Annie Mitchell, and Isabelle Dunham. He was predeceased by siblings Susan McNabb Stouder and Thomas Brown McNabb and is survived by brother Alan Brown McNabb and sister Cay McNabb Hough.

In 1963, Mr. McNabb returned to Bloomington's Indiana University School of Law, graduating three years later as president of the law school's student body. His job search led to Muskegon and the law firm of Landman, Grimm, Bradbury and Lauren, later Landman-Hathaway. He worked in private practice for the majority of his career. He was a long-time member of the Muskegon, the Michigan, and the American Bar Associations. He was appointed by the State of Michigan as Special Assistant Attorney General for Western Michigan in defense of claims against the state's Department of Labor. In his own practice, he also worked with plaintiffs in the area of worker compensation.

In civic life, he served as board member and later president of the West Shore Symphony Orchestra and was active in the development of the downtown YFCA where he played lunchtime basketball for years. Other memberships included the American Business Club and the Boy Scouts of America Timber Trails Council. He was a member of Muskegon's First Congregational Church and later of St. Paul's U.C.C. in Grand Haven. He also belonged to the White Lake Yacht Club and the West Shore Tennis Club.

In the family, he's especially remembered as coach of Little League baseball and girls' softball. And family vacations. The annual road trip to visit Grandma in Bradenton, Florida, which always coincided with Major League Baseball's spring training season. He was an avid Tigers fan. And end-of-summer treks to Mackinac Island, where everyone was up early to be first in line at the livery stable. Guerry loved to be outdoors. Swimming in Lake Michigan and building bonfires on the shore. The camaraderie of Scenic Drive neighbors. Tennis. Biking. Shoveling snow for ice skating rinks and forts. The handmade Victorian doll house for the girls and many model airplanes for Ty. He had a penchant for cars, especially convertibles, which the children greatly appreciated upon becoming licensed drivers.

The family is grateful to the staff of Robbinswood-Northcrest for their care and kind concern. Thank you. And many thanks, too, to Hospice of North Ottawa for the comfort they brought to his last days. Private interment will be at Rose Hill Cemetery in Eaton Rapids. Please visit www.clockfuneralhome.com to leave a memory or sign the online guestbook.
Clock Funeral Home - Muskegon

"Liz and family, Sorry for your loss. Andrew Hines"

"Best wishes to the McNabb family during this difficult time. I was good friends with his son, Tyghe, spending lots of time at their home on Scenic Dr. in North Muskegon many years ago. Guerry, or Mr. McNabb, as I always called him, was always very kind to me when I had the opportunity to see him. I am sorry for your loss. Sincerely, Park Kersman"

"This is for Carolyn-So sorry to hear about your dad's passing. It's never easy saying goodbye to someone who means so much. Joey Meyer (now Painter) Class of '81"