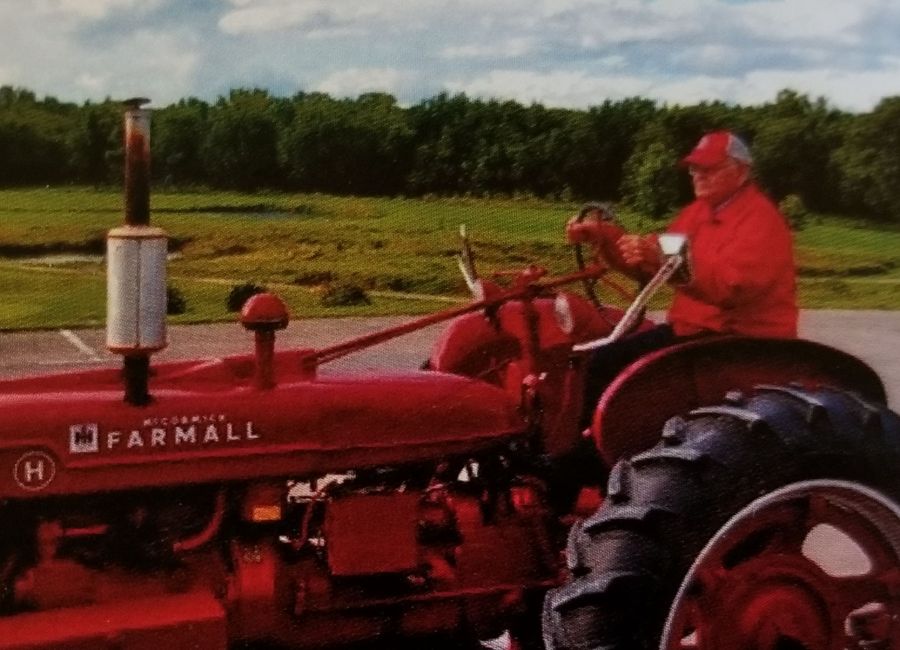 Delmar was born on February 6, 1934, to Bert and Lena (Olk) Mollenbeck at their home in rural Latimer. He attended country school at Marion #1 and was proud to share that he was the top of his class, neglecting to mention he was the only one in his class. He graduated from Franklin Consolidated in Latimer in 1952. During high school he participated in FFA and helped plant the existing grove around the school.

He met a pretty neighbor girl, Ellen Gangstead, whom he quickly decided was the one for him; he never dated another. They were married on March 6, 1955 at St. Paul's Lutheran Church in Hampton. Delmar and Ellen made their home on a 160-acre-farm, a mile from his parents. He farmed with his dad and brother for 43 years with very little conflict, but lots of coffee and tea breaks. Delmar often bragged that he never had to work after dark and that his wife didn't have to work in town.

The couple raised their daughter and 3 sons on that farm. Family life was different then. Everyone shared in the chores and their entertainment consisted of getting together with neighbors and church friends over a lunch of open-face sandwiches, cake, and ice cream.

Zion Reformed Church of rural Sheffield was an important part of Delmar's life. He very rarely missed a service and often arrived before the pastor. He served as a deacon, a Sunday school teacher, and attended the Men's Brotherhood. Delmar and Ellen were part of the "Young Couples Club" long past their youth.

The couple moved to town in 1996. Delmar still made daily trips to the farm and helped his sons as they carried on the farming tradition. Most of Delmar's conversations revolved around crops, yields, grain prices, land sales and of course, the weather.

When Hardees came to Hampton, Delmar found a new hobby...drinking coffee and telling stories with "the boys" at Hardees. He continued that tradition until just days before he passed.

Beyond his interest in farming, he will be best remembered for his likable personality. He was friendly and unpretentious. He would strike up a conversation whether a person was the state champion or in last place. He was a low-maintenance, carefree, yet quick-witted man.

He was preceded in death by his parents Bert and Lena Mollenbeck, wife Ellen Mollenbeck and brother Dale Mollenbeck.

For those unable to attend Delmar's service, feel free to join us virtually via this Zoom Meeting:
https://us02web.zoom.us/j/89377440650?pwd=cUc2M2NJTDQ3OEh5OEFHOVJ4VTh4dz09

"We are so sorry to hear of Delmar's passing. I remember him and brother Richard spending so much time together with wives Ellen and Jean. I remember him coming to visit on his motorcycle when I was quite young and they were sometimes my babysitters too! Great memories live forever. RIP "

"We are sorry to hear of Delmar's passing. We have such good memories of Delmar and Ellen and all our friends and little kids getting together in the winter time at the 500 Card Games. May Our Lord give all his family comfort at this very difficult time. Keeping all of you in our prayers. With Deepest Sympathy, Leo and Sharon Paulus"

"My parents, brother and I lived just around the corner from Delmar, Ellen and their family. I have memories of Dale and Delmar driving by my parents farm with their tractors, wagons and hay racks loaded with the harvests. My mother painted an oil looking out her kitchen window and includes Delmar and Ellen?s farmstead. I live in Pleasant Hill now and Gerald lives in Scottsdale, Arizona. I extend my sympathy to the entire family and friends of Delmar. The Ytzen?s"

"Oh the memories of our families getting together, usually on a Friday night. We would pile both families into our station wagon, and toodle the gravel roads up to Mason City. When McDonalds first arrived in Mason, that became our new hot spot to go to. The long evenings of story telling and memory sharing. Sad to learn of Delmar's passing - but I fully expect he will be watching this fall's harvest from on high. Prayers for you all."