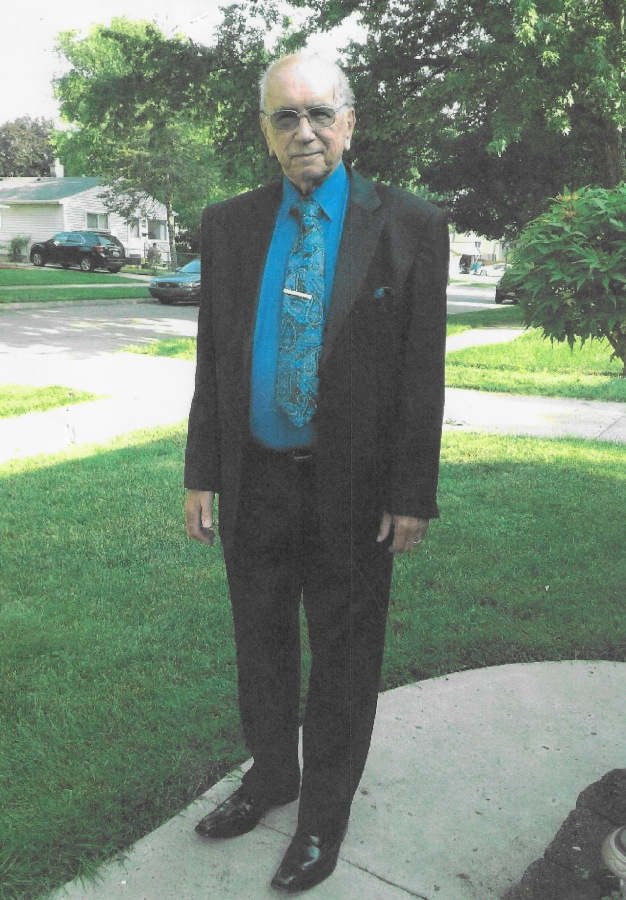 On October 2, 2021 Gerald L. Neely resident of Dearborn Heights died at the age of 89 in the comfort of his home after a year and a half battle with liver cancer. He was born January 27, 1932 in Detroit Michigan. Gerald fell in love with music at a young age. While in his teens he began his career as a church music minister and club pianist. In his early 20's he was the lead singer of the "Five Keys" and the music director of the Modern Dance Department at Wayne State University. In the 1950s when the Korean War began, he was in the ROTC National Guard. At the age of 21 he was drafted into the army. He served from 1953-1955. His musical talent afforded him the opportunity to work for special services/entertainment and as a young private he became the director of the army Battalion Band. During his time in the army, he lived two lives, one as a soldier who was the director of a Battalion Band and the other who always dressed in civilian clothes, climbed over the fence at night and worked as a nightclub jazz pianist. During this time President Eisenhower asked Raymond Burr to create an American Forces Network Radio show using soldiers stationed in Europe. Mr. Burr made Gerald the director of the radio show and he toured with his band throughout Europe and Africa. When the war was over Gerald went to the Berklee School of Music in Boston and stayed from 1956-1959. There he studied under renowned Margaret Chaloff. While attending the school Gerald played in a night club with a beautiful singer song writer named Dorothy Wiltshire who he married in 1958. He moved back to Michigan to start a family. A year later he had his first child Victor and later seven more children. In 1968 after years of studying religions and the miracle birth of his Little October Bloom- his still born child Matthew John, Gerald converted from a Lutheran to a Catholic. During this time Gerald was a staff pianist for CKLW TV-9, The Robin Seymour Show, Romper Room, and The Bill Kennedy Midnight Show. In the 1970's Gerald was the business manager of four music stores and business partner of Knight Music Company. In the 80s Gerald started a family company named Matthew John Productions with a focus on his wife Dorothy's Cards to be Treasured. He was a night club jazz pianist and music composer. He played music and was friends with some of the best musicians in the country/world such as Russell Green, Gene Cherico, Stan Getz, Joe Messina, Bob Snyder, Johnny Trudel, Red Davidson, Charlie Gabriel, Richard "Pistol" Allen, Marcus Belgrave, Toshiko Akiyoshi, and Dick Cuchetti-Conti. He tickled the ivories with the Harry Walker Trio, The Jerry Neely Trio, Jereddie Trio, the Funk Brothers, and most recently with Gabby Rosolino & Friends. He made a number recordings: records and CDs: Alley Cats, Hey Mister (a St. Jude-Conti Family - Danny Thomas Production), Russell Green: Soul of a Legend, Remembering Russell Green the Melody Lingers on... and his own CD entitled "... and then they sang God Bless America", a musical remembrance of the tragic 9-11 attack on the Twin Towers. In 1980 Gerald was the music director for the Republican National Convention which was held in Detroit. Gerald was even contracted to played music in the iconic Grand Hotel on Mackinac Island for a summer season. Gerald was loved as a music minister for the Archdiocese of Detroit for over 30 years. He led the music ministry for many Catholic Parishes including but not limited to: Our Lady of Mount Carmel, St. Luke, St. Sebastian's, and Our Lady Queen of Angels aka Our Lady of Guadalupe. He taught music in Catholic Parochial Schools and directed Spanish and English choirs.

Gerald was a devoted traditional Catholic. He was an activist for his beliefs. He composed music for the rosary prayers and many other Bible verses. He was also a writer of history, religion, science and politics. He loved a good fight and was fearless. This was evident in the 1970's when he went up against the mafia because they tried to take down his Knight Music Company. He sat in Papa Jack Giacalone's living room, face to face and walked away a victor. He even took the IRS to court and won and was bold enough to sue a U.S. president for violations against the United States Constitution.

Gerald was also a loving husband and father. Family and neighbors share fond memories of football and basketball games, as well as camping adventures in an old gray school bus.

He visited Florida in the spring of 2020 to visit his life-long friend Dick Cuchetti-Conti. He had hopes of moving there and starting a new life teaching music and playing in jazz clubs. That dream was interrupted with the Covid -19 lockdown and a diagnosis of liver cancer. While being confined to the house he studied cooking and enjoyed preparing his own meals and boasted himself a master chief to whom none of his family members could even compare. He succumbed to his cancer a year after his diagnosis and died peacefully at home with his family by his side.

Gerald is survived by 6 of his children and their (spouses): Victor, Catherine (Mike), Candace, (Randy), Shawn (Donna), Christopher (Paula), Shane (Kim) and (Clint)

20 Grandchildren and their (spouses):

He has joined many other predeceased family members including but not limited to his parents: Arthur & Myrtle; brother Kenneth; wife Dorothy; and children Matthew John and Maria. Grandchildren: Ashley, Angel Devin, and Bobbie

Funeral Services will be Saturday, October 9, 2021:

3521 Fourth Street (at the corner of Michigan Avenue)