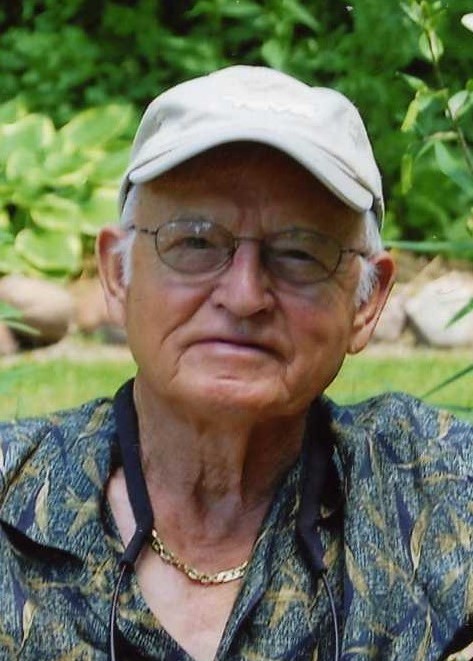 James "Ken" Peters, passed away peacefully on October 1, 2021, in his home surrounded by his five daughters. He was born on June 1, 1926, in Langlade, a son of Roy and Anita (John) Peters. Ken was united in marriage with Joyce Vivian Hanke on June 17, 1950, at St. Wencel Catholic Church in Neva. She preceded him in death on October 1, 2017.

In 1944, he graduated from White Lake High School and within a few days he was on a train to San Diego to join the Marine Corp where he served in 11th Marines Artillery Regiment in the Pacific arena during World War II. Ken returned home to Langlade in 1946 and was offered a job as Standard Oil Agent and he served the area for 28 years. He also owned and operated the White Lake Service Station that he took over from his father.

Ken's next venture was real estate. After working with his brother-in-law for several years in Pickerel, he returned to Langlade, and started his own firm, Ken Peters Real Estate. He was a broker/agent for many years helping people find homes and vacation properties.
Ken was a man who loved his community and was proud to support and promote Langlade, the Wolf River, and the village of White Lake. He was involved with organizing many events to bring visitors to the area and enhance it for its residents.

Ken served on the Langlade County Board, the Northcentral Health Care Center board of directors and the White Lake School Board. He was a dedicated member of the White Lake Area Historical Society and was instrumental in getting it started also serving as president for a time. He was a lifelong member of St. Stanislaus Catholic Church in Langlade. His ministries included altar boy, parish council and lector.
He was also a member of the Timberwolves Detachment of the Marine Corps League, Anderson-Sather American Legion Post 524, White Lake, and the Wolf River Valley Veterans of Foreign Wars Post 9438.

Growing up in beautiful rural Langlade, Ken loved to hike, hunt, cross country and downhill ski. He spent many hours helping his 5 daughters lace their ski boots and navigate the rope tow at Kettlebowl Ski Hill. He also was a lifelong learner, avid reader and letter writer, following in his mother's footsteps by being a dedicated keeper of the family history with writings, stories and photographs.
He and Joyce loved travel and visited many parts of the U.S., but especially loved the west with its mountains and deserts. They also traveled abroad and to Alaska, Canada, and Mexico. He was a great fan of the Milwaukee Brewers and the Green Bay Packers, with a nod to the Arizona Diamondbacks and Cardinals.
In 2007 Ken and Joyce retired to Tucson, Arizona where he enjoyed life by dancing the country swing with Joyce, hiking and golfing. They returned to Wisconsin in 2016 to be closer to family.

Visitation will be Friday, October 15 from 4 to 7 p.m. at the Bradley Funeral Home, Antigo, with a 6 p.m. wake service and Saturday, October 16 from 9:30 to 11 a.m. at the church.
Heartfelt gratitude is extended to the extraordinary staff of LeRoyer Hospice who so lovingly helped his daughters care for him in his final days.

"I, along with my brothers and sisters, knew Ken and Joyce all our lives. Every summer growing up, you could find 11 Peters kids at the Langlade house or nearby. But I did not know that "Uncle" Ken was a US Marine in WWII. A friend suggested I read "China Marine" and share it with him. I did and the attached photos of the letter tell of his service in China. Semper Fi, Marine! "

"My thoughts are with all of you at this very sad time. "

"My pickling cucumber man. Such a nice guy. "