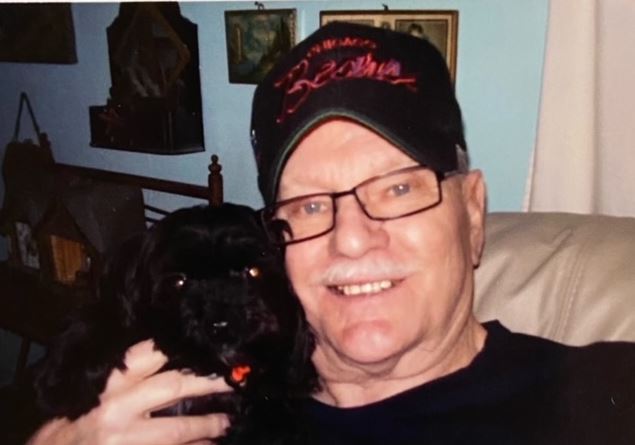 C.W. Scott best known as "Scotty" or Bill was born to Clarence and Gertrude (Fisher) Scott in Rolfe, Iowa on October 6, 1939. He passed away in Rochester, Minnesota at the exact age of 82 on October 6, 2021.

Bill served his country in the United States Marine Corps from 1958-1963. He was employed many years by The City of Estherville, Water Treatment Division until his retirement in 2003. After retirement he took on the role of full-time "Papa" and spent countless hours caring for his grandchildren. His passion for writing songs and playing guitar remained consistent his entire adult life. He performed at nursing homes and family gatherings, a true country superstar. He enjoyed years of scouting flea markets and collecting or selling antiques. His one true love was Tina-Marie, his beloved dog, who he so proudly taught to stand on her hind legs and "pray for Poppy". He was a lifetime fan of the Chicago Bears and only blessed with one official Super Bowl win. However, that had little to do with his love for the blue and orange. He created and used "the hex" on many opposing teams, obviously never perfecting it based on the sole Super Bowl win.

His stories always embellished for the listening ears, still had a grain of truth and healthy amount of comedic value. He was truly funny. He lived and loved honestly, making him a genuine one-of-a-kind to all who knew him.

He was preceded in death by his parents, his friend and brother Vern Scott; sister Mary Haugland; brother-in-law Harlan Schumacher and many friends.

A private funeral for Bill Scott of Estherville will be held later this month.
The family suggests memorials to the American Heart Association or Friends of Fort Defiance State Park.

Ranfranz and Vine Funeral Home is honored to be serving the Scott family; to share a special memory or condolence please visit www.ranfranzandvinefh.com