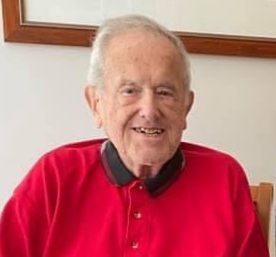 After a year long courageous battle with cancer, Donald E. Champion of Middletown, RI died peacefully in Manchester, NH on October 8, 2021 surrounded by his loving daughters. Born in Newport, he was the son of the late Margaret (Homer) and William J. Champion Jr.

Don served in the US Army from 1955 to 1957 and then transitioned to Newport Public Works. In 1965, he began his career with the US Postal Service and served until his retirement in 1995. As one who liked to keep busy, Don then began working part time at the Memorial Funeral Home and did so until 2015. Don was well known in his community and was dedicated to serving others. He volunteered for almost 30 years at the St. Joseph's soup kitchen and donated blood on a regular basis. He enjoyed catering and was an active member of the Knights of Columbus. Don enjoyed playing cards at the "Knights" on Friday evenings and was an avid golfer. His passion was spending time with his family, especially if he could get in a round or two. In his later years, Don was a regular patron at Gary's Handy Lunch and enjoyed interacting with the staff. Don will be remembered as a loving, generous and loyal husband, father, grandfather, great grandfather, brother, uncle and friend.

"ON BEHALF OF THE ATLANTIC STREET MURPHYS, CONDOLENCES TO THE CHAMPION FAMILY ON THE DEATH OF DONALD. I WILL MISS HIM IN THE NEWPORT PUBLIC LIBRARY. MAY GOD HOLD HIM AND ALL THE FAMILY IN THE HALLOW OF HIS HAND."

"I am so sorry for your loss; I will keep you all in my prayers."