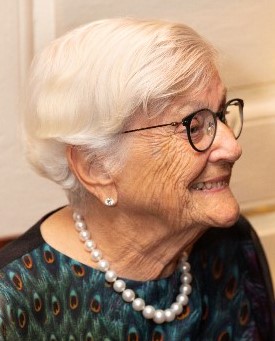 Nancy Ann (Titsworth) Edgerley, 93, a strong mother and grandmother who inspired her children and grandchildren to work hard and succeed, died on Thursday in her home in Newport.

Mrs. Edgerley, who battled cancer, Alzheimer's and dementia in her final years, died peacefully in the arms of family members and with a beloved nurse at her side.

Her friends called Nancy "a pistol" and "a force to be reckoned with," and knew her for her sense of humor and her sense of style. She studied art at Ohio State University and had an eye for design. She was admired for how she decorated her homes in Newport and Naples, FL, as well as for her collections of pressed glass candlesticks, cake stands and candy dishes (which her children and grandchildren would raid for gumdrops and licorice when they visited).

Nancy Edgerley was born on April 12, 1928, in Pittsburgh and grew up in Columbus, OH. She revered her father, Frederick Titsworth, a Quaker who fought as a Marine in World War I despite his religious affiliation. Gassed in the war, he died as a result years later when Nancy was still in high school. Her mother, Lola, never remarried.

Nancy Titsworth met Robert Morton Edgerley in Columbus when she was working in a bank and he was working for Carnation. They married in the early 1950's, and after a brief stint in Flint, MI, where he had been transferred by his employer, returned to Columbus to rear a family.

She is survived by their three children, Susan, a former metro editor and dining editor at The New York Times, of Ashland, OR; Paul B., a former managing director at Bain Capital, of Brookline, MA, and Stephen C., a former public schoolteacher and sports broadcaster, of Dayton, OH. Mrs. Edgerley is also survived by their children, her eight grandchildren, to whom she exemplified resilience. They are Susan's children, Jack Teter of Denver and Nora Teter of Brooklyn; Paul's children, Brian, Matthew, Hayley and Michael Edgerley, all of Brookline, and Steve's children, Casey and Robert Edgerley, who was named for his grandfather, both of Dayton.

Nancy Edgerley lived much of her life in Kansas City, after her husband, a sales manager, was transferred there in 1960 and the young family settled in the suburb of Overland Park, KS. Over the next 25 years, she worked occasionally at a local department store and did philanthropic work for the Kansas City Symphony Orchestra. Then, with their children grown and living in other parts of the country, the Edgerleys moved to Florida, and later, divided their time between Naples and Newport.

Bob Edgerley died on Feb. 23, 2009. He and Mrs. Edgerley loved Newport, and in her later years, Nancy Edgerley loved sitting on the porch of her son Paul's house in Jamestown, watching the waves on Narraganset Bay.

She was remembered by her family at a private lunch on Sunday with a few close friends. In lieu of flowers, donations may be made to the Newport Public Library or St. Jude Children's Research Hospital.

"My sincere condolences to the Edgerley?s family. Nancy was a lovable person I called her Fancy Nancy and she used to called me Shirley Temple when I had my hair curled up. She was funny, we laughed, sing and dance a lot. She had a song for everything. She was very impatient to meet my baby ?baby Jacob?. I still have most of her songs in my head and I sing them to my baby. Fancy Nancy is gone way too soon and she will never be forgotten!!! Rest In Peace Queen!!!!"

"My condolences to Nancy's family. I only knew her briefly but she was always kind. And I will always remember her quick wit! She was one of those people who made you feel at ease and like they've known you for their whole lives. May your wonderful memories help you through this difficult time. "

"Delasalle will not be the same without Nancy. This summer I sat and chatted with her on her terrace one last time. She will be missed."

"Nancy or as I called her mrs Titsworth had a very large space in my heart I loved her unconditionally and had many memorable times with her over the years we shared many lunches dinners and trips to super markets or just morning coffee where we solved all of the word problems I cannot believe she has left us but know she is in a better place To her family she was so proud of all of you I will miss her terribly but am a better person for knowing her may you Rest In Peace dear friend your memory will forever be in my heart Love Joan ??"