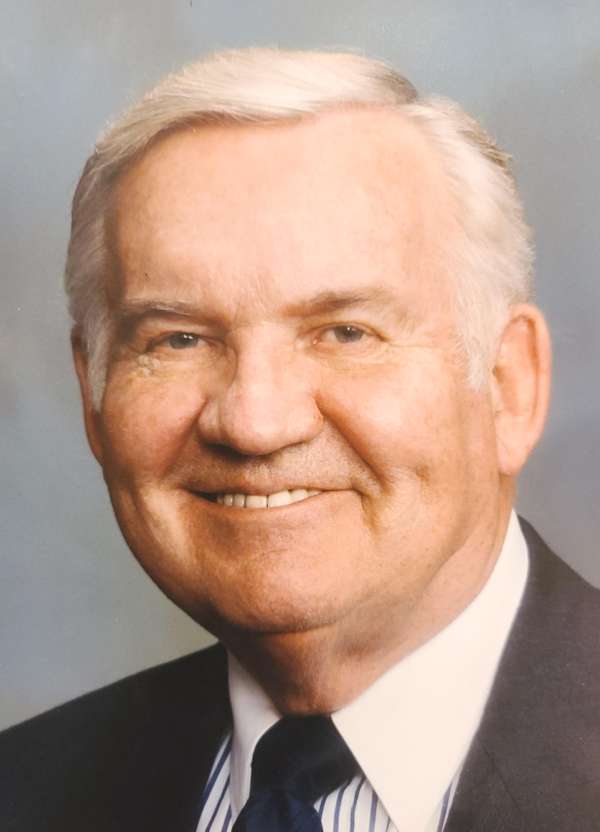 A Funeral Service will be held at 11:30 a.m. on Friday, October 15, 2021, at Calvary Church. Reverend Dan Schoepf will officiate. Burial will be in Greenwood Cemetery.

Visitation will be from 10 until 11:00 a.m. on Friday, October 15, 2021, at the church. The Ralph J. Wittich-Riley-Freers Funeral Home will be in charge of arrangements. Memorials may be made to Calvary Baptist Church or Samaritan's Purse. Online condolences may be made at www.wittichfuneralhome.com.

Donald was born on February 14, 1928, in Kansas, Missouri, the son of Fred Carl and Vida Mabel Rittenhouse Grensing. He married Donna Mae Silberhorn on November 26, 1954, in Muscatine.

Don graduated from Muscatine High School in 1946. He later attended Muscatine Community College, Iowa Wesleyan, and University of Iowa, where he received his Bachelor's Degree in 1952 and later received his Master Degree in 1966. Donald was in the US Army during World War II. He was a charter member for Calvary Baptist Church and Sunday School teacher from 1954 until 2014. Donald was involved with the Muscatine Red Sox for seven decades; he was a player and then later player/coach. Don was the Chaplain for the Quad City River Bandits.

He was named in many Hall of Fames: Iowa High School Boys Basketball coaches in 1988 and Administrators in 1998, Muscatine High School Hall of Honor in 1998, Iowa Athletic Directors in 1999 and in 2000, Quad City Times in 2010, National Semi Pro Baseball in 2014, FCA (Fellowship of Christian Athletes) Illowa Chapter Hall of Faith in 2015, and Iowa Wesleyan in 2016.

Don is preceded in death by his parents; sister, Joyce Grensing Guy in 1999.

"So sorry to hear this. Don was a great man and mentor to many. He has left a wonderful legacy and helped raise three tremendous daughters. I will never forget what a special person he was. Prayers to all of you."

"So sorry to hear of Don's passing. I didn't know Don as a teacher and coach, but as an excellent tour leader. He and Donna brought many tour groups to the Butterworth Center & Deere-Wiman House. I enjoyed getting to know both and will treasure the memories. Gretchen Frick Small"

"The Bilter Families: Our deepest sympathies. Our family wishes to express our condolences to the families of Mr. Don Grensing. What a beautiful, wonderful life he lived. We wish you peace and comfort at this time."

"We are so sorry to hear of Don?s passing, he was the best Sunday School teacher we ever had. All of the family are in our thoughts and prayers. God bless."

"Spent many years working with Don. He has my utmost respect. He was a very honest person, he cared about his teams and one could always know that Don was there when he was needed. To the family, my sincere condolences; he is one of the best!"

"Spent many years working with Don. He has my utmost respect. He was a very honest person, he cared about his teams and one could always know that Don was there when he was needed. To the family, my sincere condolences; he is one of the best!"

"We want to extend our sincere sympathy and condolences at this time of your loss. We hope you can look back at your good memories for comfort and peace to ease your heart. Respectfully, The CHS Classmates and Reunion Committee for the Class of 1970"

"I was privileged to have Mr. Grensing for a teacher, American history and Drivers' Ed. He was a great teacher and coach, and a fair man, his rules were for all, athletes and students alike. He was an example as a person. Anita Hartley Class of 1958, Wilton High School."

"Don was an outstanding teacher and coach. He was also a fine gentleman with a great smile and sense of humor. His love for others followed the teachings of Jesus. Don will be greatly missed by all that knew him. Rest in peace, Bill and Betty Stone"

"Don struck me as someone who would live forever. And now he will, forever, with Jesus! Don & Donna, you are two of my all-time favorite people! I am so blessed to have grown up with you both in my life, and especially in my formative high school and college years. So many memories come to my mind . . . Don reading Scripture and praying at the breakfast table in that strong voice of his; going to volleyball matches & Bible studies with you; Don making daily rounds as personal "hospital chaplain" when I and others he knew were all at Mercy Hospital the same week. I loved Don's passion - for sports, history, the Bible, his family, friends, neighbors, church and most of all, for Jesus. So happy for him today! My deepest sympathies to his beloved family. He will be missed so much, but his legacy will live on through all of you. "