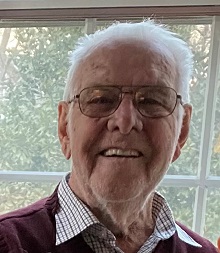 Richard H. Graue, of Schnecksville, formerly of Willow Grove, died peacefully on Tuesday, October 12, 2021 at the Lutheran Community at Telford. He was 89 years old.

Born in Hamburg, Germany, Richard was the son of the late Hans and Louise (Peine) Graue.

He was an engineer by apprentice. He worked in the photo finishing business throughout his career, most recently at Qualex in Allentown, prior to his retirement in 2002.

Richard served in the U.S. Navy from 1955 to 1957, where he spent much of his time as a photographer. He and his wife Elfriede emigrated from Germany to the United States, unknown to each other until they met and married in 1958. The young family settled in Willow Grove before moving to Schnecksville, PA in 1979.

In addition to photography, Richard had a passion for architecture. He loved to build, and his children and grandchildren have been the recipients of custom made tree houses. He enjoyed the natural world, and camping, hunting and fishing were some of his favorite pastimes. Richard was born with wanderlust. He and Elfriede travelled the world; with trips to Germany, China, and South America, especially their ultimate trip to the Southernmost Point.

Friends and relatives are invited to call on Monday, October 18, 2021 from 10:00 to 11:00 AM at the Anton B. Urban Funeral Home, 1111 S. Bethlehem Pike, Ambler, PA 19002. Richard's funeral service will follow at 11:00 AM with Rev. Frank Sayford officiating. Interment will be in Sunset Memorial Park, Feasterville.