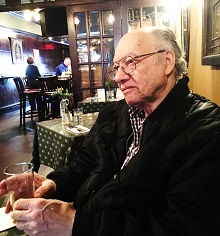 William Ernest Watkins, Jr., "Bill", of Doylestown and formerly of Ambler, died peacefully on Monday, November 8, 2021 at Doylestown Hospital. He was 86 years old.

William was born in McComas, West Virginia, the son of the late William Ernest and Georgia (Roland) Watkins.

Bill was a 1953 graduate of Ambler High School. He served in the US Air Force from 1955-1959, and was stationed in Japan for two years. He was honorably discharged.

Bill was a highly skilled photographer who established studios in Philadelphia and later in Concord, NH. He worked in photojournalism as well as advertising and architectural photography. He always took photos for himself as well, and exhibited in multiple shows over the years.

Bill was an intelligent man with many talents and interests. He became fluent in Mandarin Chinese following course work at Yale while he was in the Air Force. He was interested in and self-taught in other languages as well. He was a talented painter who worked primarily in watercolor. He was widely read. He was a lover of books and never seemed to have enough book shelves to contain them all. Art and photography were a special focus of his collecting.

His observant nature and dry wit were enjoyed by many. Puns were never in short supply. He was always curious about the universe, however many there might be, and what experiences lay beyond. He was open to many possibilities. He traveled far from the West Virginia coal fields where he was born and will be missed by all who knew him.

Bill is survived by his wife of 57 years, Nancy (nee Moldovanyi). He is the brother of Diane Grines and her husband Frederick, of Ambler; April Phillips and her husband Bernard, of St. Thomas, VI; and William "Billy" Munroe, of Seattle, WA.