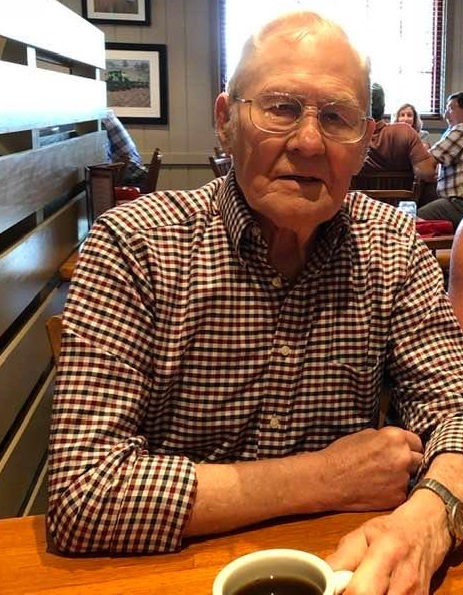 Gerald Marion Van Zante, age 99 of Monroe, passed away on Tuesday, January 4, 2022. Funeral services will be held on Sunday, January 9, 2022 at 3:00 pm at the Monroe Presbyterian Church. The family will greet friends following the service with a luncheon at the church. Memorials may be directed to the church and condolences may be left for the family at www.coburnfuneralhomes.com


Gerald Marion Van Zante was born April 6, 1922 at the family home near the four mile crossing in rural Pella. He was the first born son of Delis and Nellie Gosselink Van Zante. His brother Edward Glen joined the family later. The boys did all farm boy things, making hay, thrashing and showed cattle at the county fair. He also played the clarinet in the 4H band at the Iowa State Fair. Gerald attended country school and then attended Pella High School. He would stay with his grandparents in town during the week while going to high school. He loved attending his class reunions and reuniting with classmates. After the reunions we would hear for months his stories about his and his classmates' teenage adventures.

He met Rena, his future wife at the roller skating rink Pella. Gerald joined the Navy Feb 29, 1942. He was an aviation mechanic serving in Hawaii. He and Rena were married Jan 18, 1946 at Rena's aunt and uncle's home near Leighton. After being discharged in May 1946, he and Rena started farming and Gerald worked for Van Roekel Plumbing. In 1952 they bought a business from Wayne Lubberden and moved their family to Monroe which by now included two children Donna and Ronald. John joined the family a year later. Pulling pumps was a big part of the business which meant cold, wet, late nights and lots of weekend hours. Several young men in the community were fortunate to learn the trade from dad.

In his middle 70's he went to work for Vermeer's and later Pella Plastics where everyone called him Grandpa. Gerald & Rena loved the Iowa State Fair, camping in the same spot for many years. They became superintendents of Pioneer Hall where rope making was his trade and made him famous. It would be fun to know how many people got one of his famous ropes. They worked hard at making the fair very successful every year. Because of their love of camping they became members of the local good Sam's club. He never knew a stranger and he always could find a new friend to talk to.

Gerald is survived by his three children, Donna Rooda, Ron and Bonnie Van Zante and John Van Zante. He was so proud of his 11 grandchildren, 21 great grandchildren and 10 great great grandchildren. Preceding him in death were his parents; his wife, Rena and a brother, Edward. The past 3 months have been difficult for Gerald, he missed his bride so much. After 75 years together, not having her by his side was so hard. Rena probably greeted him with "Where have you been and who have you been talking to?"

"My condolences to the whole family. I spent many hours at the VanZante home with Donna when we were growing up. Gerald could be such a tease and always made me feel welcome. Lana DeVries Vroom"

"Donna and family- Sincere condolences. I remember your Dad very well from when we were kids. A good man. I didn?t know he started out working at Van Roekel Plumbing in Pella. That was my uncle?s business long, long ago. Artis Van Roekel Reis"

"What a lovely tribute to Gerald- I especially loved the last part about your mom greeting him asking who he?d been talking to. Our thoughts and prayers are with you all in this time of earthly sorrow. Larry and Cindy Van Wyk"