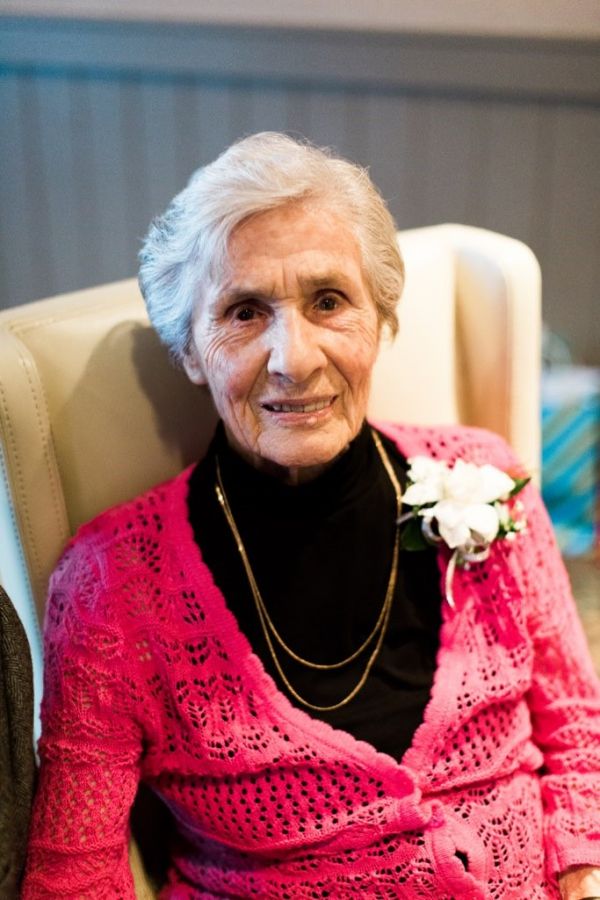 She was born in Seattle on July 19, 1922, the fourth child of Charles Ward Jennings and Lora Maud Denny Jennings, joining siblings John, Charlotte, and Loretta. Shirley was pleased to be a member of the Denny family, pioneer founders of Seattle.

As a young lady, Shirley loved to drive. She often talked about how her father owned the first car on the block when she was a girl, and she learned to drive as soon as she could. She graduated from Lincoln High School in 1940.

She met her future husband, William H. Thomas, at University Presbyterian Church in Seattle where they were married on January 23, 1942. They raised five sons: John, David, Stephen, James, and Daniel. Bill and Shirley celebrated their 75th wedding anniversary in 2017, and Bill passed away on August 6, 2017.

Shirley was a caring, devoted wife, mother, daughter, sister, mother-in-law, grandmother, great-grandmother, and friend. She often worked outside the home but still cared for her husband and sons and cooked nutritious, delicious meals from scratch. Each morning she sent her men out the door with lovingly prepared sack lunches. Stephen recalls that in high school, his mother always made him two sandwiches on whole wheat or rye bread, with ham or roast beef or salami, mayo, mustard, pickles, lettuce, and sometimes onion. She also sent him to school with carrots that were sliced and salted, and apples that were quartered, cored, stuffed with raisins, reassembled, and wrapped securely. Stephen often received requests from classmates to trade lunches, but he knew he had the best lunch in all the school and wasn't about to settle for anything less.

John recalls that as a kid, he suffered from motion sickness, especially if he rode in the back seat. He says, "Dad (the Navy chief with sea legs) would tell me, 'Buck up! It's all in your head.' Mom usually came to my rescue and let me sit in the front seat where I did much better. I attribute her support to her warmth and love, but it probably was mixed with the practical aspect of not having to clean up a big mess if I was assigned to the back seat."

Shirley's employers quickly recognized her as a capable and trustworthy person and offered her more and more responsibilities. Among other employment, she worked in the Humanities Department at Shoreline Community College for many years. She also carried out significant responsibilities at Augusta National Golf Course where she met interesting people playing in Masters Tournaments. Gary Player and Arnold Palmer were competitors in those days, and Jack Nicklaus was still an amateur. President Dwight D. Eisenhower played golf there, too. Shirley met both the President and his wife Mamie, who gifted Shirley with a transistor radio.

In 1957, Bill and Shirley bought a home in Shoreline on Dayton Avenue North. But Bill was a career military man so, alongside him, Shirley lived in Germany three times (Bad Nauheim, Frankfurt, and Stuttgart) and twice in Augusta, Georgia. After Bill's retirement, they returned to the Dayton house. In 1974, they moved to rural Kingston, in 1999 they relocated to Richmond Beach, and in 2014, they moved to the Cristwood Park retirement community in Shoreline.

The two loved to travel and saw most of the world--western Europe, Asia, Australia, Russia, Africa, and the South Pacific. They also enjoyed traveling throughout the U.S. in their camper van. Shirley and Bill took several trips to Israel and volunteered long-term in hospitals there. In 1978, Shirley traveled alone to a remote mission center in South America to visit her son David and his family. While there, she received an invitation to spend several days in one of the most primitive indigenous villages in the world. Assured that her son and grandkids (ages eight and six) would accompany her, she agreed to go, only to learn at the last minute that the tiny plane was overloaded and David had to get off. As she and the kids flew away, Shirley wondered what she was getting herself into, but she found the experience easier than she expected. She celebrated her 56thbirthday there in that distant jungle and talked about the adventure for the rest of her life.

Shirley was a quiet, humble, gentle, but strong lady, a safe person for others to be around. Her relatives and friends experienced her non-judgmental grace time and time again. She enjoyed having family holidays at their home and hosted many a huge, happy gathering. Family members were always welcome to stay in their guest apartment in the basement. She was also devoted to caring for kinfolk and friends as they grew old and faced death. Shirley lived her whole life to serve and love others, asking nothing in return.

An avid reader, she was always reading--poetry, fiction, non-fiction--and even wrote her own poems. She also loved to garden and was especially fond of her roses, sweet peas, irises, and pink dogwood.

Shirley loved God and because she wanted to go deep with Him, she was an eager student of the Bible and other spiritual materials. She and her family attended Calvin Presbyterian Church in Shoreline for many years. When she and Bill lived in Kingston, they attended Indianola Community Church. In her later years, she returned to her first church, University Presbyterian, listening every Sunday on the radio.

"A mother's influence is so great that we model it even when we don't realize it, and we often return to it," writes Charles R. Swindoll (Day by Day with Charles Swindoll). "More than any statesman or teacher, more than any minister or physician, more than any film star, athlete, business person, author, scientist, civic leader, entertainer, or military hero, [your mother is] the most influential person in your . . . life."

The family will always be deeply thankful for their beautiful mother, mother-in-law, grandmother, and great-grandmother. They will love her forever.

Cascade Memorial in Bellevue is in charge of arrangements.

"What a lovely tribute for a wonderful woman! I remember visiting the Kingston house when I was a kid and had so much fun with all the cousins. I saw Shirley and Bill at Loretta?s funeral a few years ago. What a lovely couple! So sorry for your loss. Laura Baldwin (Loretta?s granddaughter by Larry). "

"When Steve mentioned his school lunches, that brought back a memory, the hike with the cousins over Park Creek Pass. Shirley packed lunches for all seven of us. And yes, it was generous. And riffing off Seth, I was the beneficiary of many emails. Bill and Shirley supported our Wycliffe ministry until the moved into retirement living. And each month I would write a thank you note. Once email became available, I would get responses from Aunt Shirley. She was the most prolific of all the people I corresponded with. She would engage me in theology. And she was challenging, making me rethink a few things. May God bless you, cuzzes, and may today be a continuing source of comfort and fond remembrance for you. Paul Thomas"

"You loved us all so well, Grandma. We feel your absence and will hold you in our hearts. - Seth"