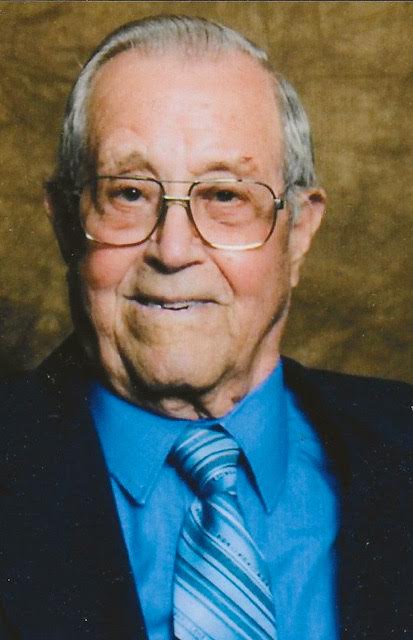 Lawrence was born in Baxter to Leopold and Matilda (Bach) Halter on September 26, 1919. He attended Baxter School until the 8th grade when it was necessary for him to drop out of school to earn money to help support the family. He worked on Carl Bach's farm from 1935 to 1940 and then worked at the Automatic Washing Machine Company until 1941 when he enlisted in the Army. When he was in Basic Training in Texas, the Japanese attacked Pearl Harbor, and he was immediately sent to Hawaii where he served as a rifleman for the 27th Infantry Division, 106th Battalion in the Southwest Pacific for 32 months without ever coming home, until his discharge in November of 1945, due to contracting yellow jaundice. He then returned to Baxter and continued work at the factory in Newton for 20 years until it closed.

In 1948 he met the love of his life, Cora Bovee, at a dance in Marshalltown, and they were united in marriage on August 12, 1950. They were married for 68 years and resided in Baxter where they raised their family.

After his factory job, he was employed by the City of Baxter where he managed the city's water system, plowed snow, maintained the streets and the city cemetery, and dug graves by hand until he retired in 1982. Upon his retirement, he worked part time into his 90's at the Maytag Dairy Farm and Rock Communications in Newton. He was a member of the American Legion #493 for over 50 years, an 80-year member of the Baxter Congregational Church, and over a 20-year-member of the Baxter Fire Department. Through the years Lawrence always enjoyed camping, sitting around a good campfire, fishing, hunting, gardening, reading Westerns, and walking.

Lawrence was preceded in death by his wife Cora in 2019 as well as his brothers, Louis, Harold, Wilbur, and Robert, a sister Lucille, his parents, and his son-in-law Ken Mills.

Memorial contributions may be directed to the Congregational United Church of Christ or the Baxter Fire Department.

Fredregill Funeral & Cremation Care, in Baxter, has been entrusted with the care of Lawrence and his family.

"I'm sorry for your loss. We may have related. Does anyone know or remember Pearle, Henry, Maxine? I'm on Ancestry as Trex62cb."