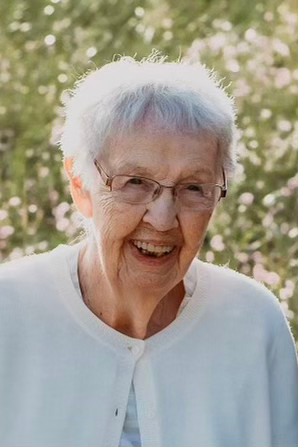 Mrs. Florence Matilda Brosey-Gecowets, age 95, passed away Friday, January 14, 2022. She was born in Muskegon, MI on November 19, 1926, to Arthur & Fredia (Johnson) Lindberg and married Arthur William "Bill" Brosey Jr. on October 5, 1946. He preceded her in death in 1983. She later married Ralph Gecowets in 1987 and he preceded her in death in 2007. She was wonderful wife, mother and homemaker and took the time to be the bookkeeper for Bill's Business (Robinson's Towing). Florence was also a member of Forest Park Covenant Church.

Please visit www.clockfuneralhome.com to leave a memory or sign the online guestbook.

"So sorry to hear from cousin Shirley that Aunt Flo recently passed. She was a lovely lady who I will always remember playing her ukulele while my dad played his guitar at our family Christmas parties. She was the aunt that welcomed me into the family after my mom married her brother and the aunt that visited us several times with my parents when Ken and I moved to Mason back in the 1970's. She was a very dear friend to my mom and she and I managed to keep in touch and we would stop in and see her over the years when we returned to Michigan. She was always kind, down to earth and had a sense of humor. May she rest in peace. Ken & Carol Obriot "

"Holly & Steve.. Even though I havent seen you in many years, I wanted to send my condolences. Hoping good memories will help you thru this time. Mardi Monroe Williams "