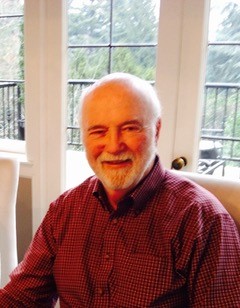 Carl Renauld Hill passed peacefully Tuesday evening, March 15th to the music of Chopin, his favorite composer, with family by his side. Born at home in Hudson, MA to Carl William Hill and Doris Austin Hill, he grew up in the countryside of Berlin, MA where he connected with nature while exploring the miles of woodlands in his backyard. He enjoyed being outdoors fishing, hunting, camping and hiking throughout his life. He was the youngest of five children.

He was considered a piano prodigy. He auditioned for Arthur Feidler's Boston Pops at the age of 12 where he received accolades for "keyboard touch, musical expression and interpretation of Debussy and Beethoven." He loved and pitched baseball and was known for change up pitches and killer curveballs. He was a marksman who learned to shoot with a Remington 22 single shot bolt action rifle. He met his beautiful wife, Barbara Curtis, at a skeet field where his marksmanship impressed his future father-in-law, Mercer E. Curtis of Marlborough, MA. They were married on November 30th, 1953 and honeymooned camping on Mount Washington, NH. On their 50th wedding anniversary, their children gifted them a trip to Kauai, Hawaii, which they said felt like another honeymoon! Despite life's challenges, they enjoyed 67 happy years of marriage in which they were best friends. Carl spent the last fifteen years of his life fighting Parkinson's Disease and Barbara became his main caregiver. It was heartwarming to witness their love for each other during his last days on earth.

He started his professional career as a tool and die maker for Surprenant Manufacturing Co. in Clinton, MA. He later held engineering positions with Hitemp Wire Co., Westbury NY; Revere Corporation of America, Wallingford, CT; and Director of Operations with Galite Division of Galileo Electro Optics in Wallingford, CT. His career culminated in becoming the Executive Vice President and Chief Operating Officer for The Whitney Blake Company of Vermont, Inc. Carl was honored to receive the Charles D. Scott "Distinguished Careers Award" for his contributions to the wire and cable industry. Carl's intelligence, humility, compassionate heart and listening ear made him popular among his employees and colleagues.

Family life was rich in outdoor activities including hiking, picking (and eating!) apples and peaches at Lyman Orchards in Middlefield, CT, skeet shooting, tobogganing, camping, boating, water skiing, vacationing at Newfound Lake, NH and Kokadjo, ME, and playing baseball with the family-neighborhood baseball team. He was a father who inspired, set an amazing example of hard work and effectively guided his children when they needed it. He was generous, patient and kind. He mentored and motivated all of his children. Family, friends and his caregivers often described him as "the sweetest man."

He is survived by his wife, Barbara Hill now of Tacoma, WA; daughter and son-in-law, Bonnie Hill and Tim Haddad of Tacoma, WA, their child, Anna Haddad of Cambridge, MA; Keith Hill of Haddam, CT; Russell Hill and daughter-in-law, Sherry Forline Hill, of Durham, CT, and their children, Erika Hill of Wayland, MA and Katelyn Hill of Quincy, MA; Warren Hill and daughter-in-law, Valerie Siqueira Hill of Portland, OR and their children, Michael Hill of Portland, OR and Alex Hill of Colorado Springs, CO.

Our family is grateful for the caregivers at The Weatherly Inn in Tacoma, WA and Franciscan Hospice.

There will be a celebration of his life and a graveside service in Berlin, MA at the Berlin Cemetery located on the corner of Pleasant Street and Sawyer Hill Road on September 8th at 2 o'clock pm EST. For those of you unable to make it, please light a candle during this time.

Donations in tribute to Carl R. Hill can be made to the Michael J. Fox Foundation for Parkinson's Research.