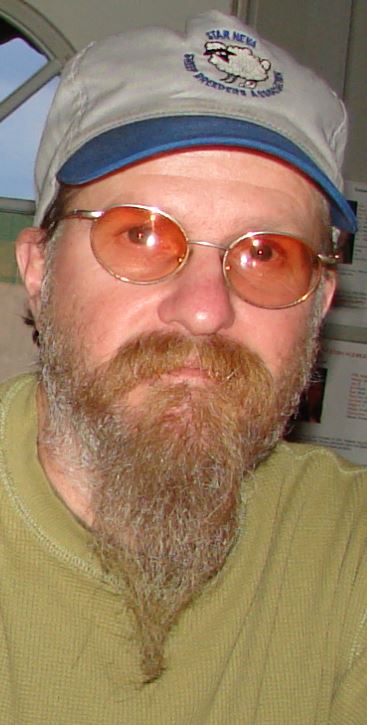 In addition to his parents, he is survived by two sisters, Jean (Gary) Jenicek and Mary (Mike) Jira; and three brothers, Joe, Tony (Lynn), and Chris (Mary).

After earning a computer science degree with a graphic arts minor from UW-Green Bay, Rob held the titles of President of Star Neva Sheep Breeders Association and Chief Sapper of the Nervous Ewe Maple Syrup Operation.

No services will be held.

"Wob was truly one of the most eccentric people I have ever met. He knew folks thought he was a weirdo, but he was o.k. with that and could care less. We would talk for hours at Quinn's about just about everything. Sometimes he would annoy me, and I would annoy him more. We would argue, and I would tell him, it's ok to be wrong once in a while, which I'm sure he didn't like. I learned he was one of the most intelligent and insightful people I have ever met. He had a very simplistic lifestyle...listening to AM radio, stoking the sap shack fire, watching basketball, gardening, tending to his chickens, drinking his dark beer, bs-ing with friends and family. He was a meticulous craftsman...perfectionist to say the least. His carved chains are a true work of art. Wob didn't have a lot of friends, but treasured the dear friends he did have. He would share funny stories and antidotes often. Although he bitched about them a lot, his love for his family was deep and fierce. He spoke often/would tell stories of his nieces, nephews and brothers. He thought his Mom to be the kindest soul ever, who deserved far more than she ever received. He had a deep love and appreciation for the olden days. His meticulous research, cataloging and preserving of his family history, as well as Neva/Star Neva history was a work of love, and appreciated by many, including myself. Wob was an 'interesting character' who will forever be in the hearts of everyone who knew him. Thank you for letting me into your world, and I truly hope you are 'sittin on a rainbow', dear Wob Wob."

"Getting drunk in the sap shack was the best!"

"Oh my! Our thoughts and prayers to Bob, Carol, siblings and friends. May God hold you close! "

"I remember Rob from high school and always liked him and his smile. My sincerest condolences to all. Julie (Baraniak) Theisen"

"I think I was always a bit in awe of Rob (part scared, part star struck). Rest in Peace and assuredly you are making the afterlife a better place. Take care Jira family. Theresa (Darr) David"

"My condolences to your family. I always enjoyed talking to Rob when I would see him. God bless. Deb and Ron Gallenberg "

"My sympathies are with you all my love also"