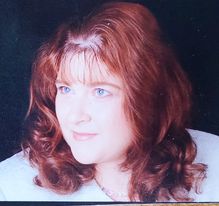 Paula Jean (Parker) Connell passed away at home in Muskegon, surrounded by her family, on Tuesday, April 5, 2022, following a valiant battle with ovarian cancer. She was 61.
She was born in Grand Rapids on Oct. 11, 1960, completing a family that included her parents, Loyd and Dorothy Parker, and her big brother Ken Parker. She graduated from East Kentwood High School and later received several medical certifications from Muskegon Community College.
A gifted musician from an early age, Paula loved everything from classic rock to country to big band and beyond, with a deep affection for traditional folk and Irish music. In addition to singing, she played many instruments and was happiest when making music with friends. She especially loved hammered dulcimer, bodhran, and accordion, and was a long-time session musician at the former Fenian's Irish Pub in Conklin. She also adored live theater and performed, sang, and worked behind the scenes in many productions.
She was passionate about politics and social justice, which she wrote about frequently and well online, and she volunteered for many community organizations. She loved nature, especially flowers, and art, especially works by Monet, and enjoyed reading, cooking, gardening, antiquing, traveling, and spending time outdoors, among many other pursuits. She herself wrote: "Mine has been a rich and full life, for which I am profoundly grateful."
Paula's greatest joy was her family, and she considered her children and grandchildren her most precious blessing.
She was predeceased by her parents. She is survived by her children, Aaron (Paula Martinez) Connell, Rose (Scott) Smith, and Sam Connell; four grandchildren; her brother Ken (Anne Stuart); her former husband Greg Connell (Judy Lee); many, many friends; and her beloved cat Molly.

Friends and relatives are invited to celebrate the life of Paula Connell on Saturday, July 2, 2022, at the Harbor Unitarian Universalist Church, 1296 Montgomery Ave, Muskegon, MI 49441. Visitation from 11 a.m.-noon. Memorial service at noon, followed by a potluck luncheon and a traditional acoustic music jam. You're invited to contribute food or beverages to the potluck, if that's convenient, but your presence is what Paula would have most appreciated, and her family and friends will as well. Flowers may also be sent to the church.