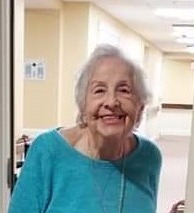 Dorothy May Carpenter, 89, died Thursday, June 16 at Newport Hospital. She was the wife of the late Norman S. Carpenter.

Born February 19, 1933, in Middletown, a daughter of the late John and Mary (Dutra) Arruda, a lifelong resident of Middletown, she formerly lived at Bayview Park and recently St. Clare Nursing and Assisted Living in Newport.

In lieu of flowers, donations may be made in Dorothy Carpenter's name to The Alzheimer's Association, 245 Waterman Street, Providence R.I. 02906.

"My deepest condolences to Jeff, Sue and extended family, many great memories over your Mom's and Dad's back in day, hugs...very sad"