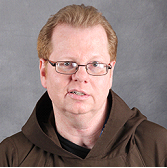 He enlisted in the U.S. Air Force in 1984 and attained the rank of Sergeant. As an airplane mechanic (F-15 fighter) and an aerospace propulsion specialist, he served with distinction and was honorably discharged in 1993.

Soon after his discharge, Br. Dave entered formation to become a friar. He was invested in the Order of Capuchin Franciscans on August 15, 1994 and made perpetual profession on August 5, 2000.

During his theological studies in 2002, he experienced a stroke while traveling on pilgrimage in Assisi, Italy. The stroke affected half of his body and greatly limited his abilities. In spite of his cross, Br. Dave served as part-time porter at the Solanus Casey Center in Detroit alongside his Capuchin brothers. Even through his limitations, he was a welcoming face for pilgrims who came to visit the Center.

In 2009, Br. Dave required more personal care and moved to Wisconsin to become a part of the Capuchin retirement community. He found ways to help his older Capuchin brothers and participate in their lives while he himself received care. Health complications would persist and he was eventually moved to the Veteran's Home nearby. Even as his health continued to deteriorate, he would sit and listen to the other veterans as they carried their own struggles.

While Br. Dave's story was unfortunate, he was a witness to his Capuchin brothers and to his fellow veterans about perseverance and hope.

He is preceded in death by his father James Edward Heffron and his mother Janet Rose. He is survived by his brothers James A. and Scott Heffron, his sister Lisa Vaden, as well as his many Capuchin brothers with whom he lived, prayed, and ministered for over 26 years.

Funeral arrangements will be held on Thursday, July 28 at St. Bonaventure Chapel, located at 1740 Mt. Elliott, Detroit, MI. Visitation will begin at 4PM. The Liturgy for Christian Burial will begin at 5PM. Burial to follow. A livestream of the funeral can be viewed at the following link https://thecapuchins.org/br-dave-heffron

"Dave was always the life of any gathering we had, loved our deep talks. Love you my big brother"