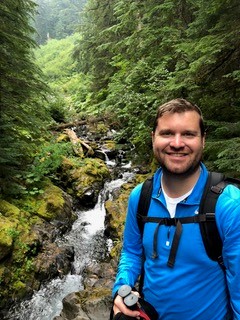 Ross was born in Seattle, Wash. on December 3, 1985. His mother, Joan Roberts, and father, Philip D. Chapman, cherished the arrival of Ross with his sweet spirit, and welcomed his brother, Tom Roberts Chapman, 22 months later. The "Energy Brothers" lived an idyllic little boys life on an acre in Lawton Wood, next to Discovery Park - an acre with a stream, blackberries, and all of nature surrounding them.

When Ross turned five, the family moved to Boise, Idaho where life was simpler and the drier weather kinder for young boys who needed to be outside. Mark Johnson joined the family as Ross and Tom's stepdad when Ross was eight years old and has been part of the family ever since.

Ross's joyful, kind and considerate disposition, and academic achievements were rewarded throughout his school years in Boise. Ross always enjoyed music (he was a member of the Boise High Madrigal Singers for three years) as well as soccer, lacrosse, snowboarding with Tom and Mark, cross country and track. He was a good student and quick learner, graduating from Boise High in 2004 (Go Brave!)

Ross became a proud University of Washington Husky (UW) and a member of the Sigma Chi Fraternity, graduating in 2008. He leaves a pledge class of mates who will miss "Hot Tots" and their forged fraternal bond.

Family vacations were always fun with road trips to the Canyonlands, lounging in Hawaii, golfing with his brother and Mark in Arizona, or spending summers at the beloved family cabin on Coeur d'Alene Lake. Ross was always going somewhere. He never missed a wedding or bachelor party, a quick trip to Vegas, Puerto Rico, Mexico, and yearly golf outings with his best friends.

Ross began working for Joey's Restaurant the summer after his college freshman year, He worked there all throughout college and became the manager of Joey's in South Center when that location opened in 2008, a job he would have for 4 years. He made many long-lasting friendships at Joey's and even officiated a few weddings for the group.

In 2011 Ross took a leap into the IT world and was hired by Affirma Consulting, eventually working his way up to Director of Business Development. He thrived in the Affirma culture and respected the business community they served. Affirma valued his care for detail, sense of humor, and human relations.

Ross loved all the major sports of Seattle, and the UW Husky teams. He was loyal to the Seattle teams, but the Dallas Cowboys took his heart during football season. After Ross passed away one of his fraternity brothers said "He is probably in heaven watching the Cowboys and Huskies win a championship-God knows that won't happen down here."

Ross made us all look good as a mother, dad, brother, friend or an employer. He will be greatly missed by his large extended family of aunts, uncles, cousins. He loved his family. We are grateful to have had him for 36 years.

Ross did not deny himself "fun". However, there was a regrettable aspect to the fun which Ross sought to pursue. He burned the candle at both ends with work and play, and it was the "fun" associated with alcohol that was his demise. He died of complications with acute pancreatitis and other vital organ failures. We wish to express our profound appreciation to the UW Northwest Medical ICU staff for their valiant efforts to save Ross's life.

A celebration of Ross Chapman's life will be held on Wednesday August 31, 2022 between 2 p.m. and 6 p.m. at Sylvan Grove on the University of Washington Campus. Attendees may park at various locations on campus in self-serve parking lots:

or take the Light Rail to the University of Washington Station.

"I didn't know Ross that well, but we moved in the same tech circles over the past ten years and would get together occasionally in that capacity. Ross was a SUPER good guy; positive, outgoing, friendly and empathetic. The world is diminished by his loss. -Dave Page"

"Joan. I just learned about your great loss. I can?t begin to imagine the depth of your grief. Please know that I am sending love and virtual hugs to you. I?ll dance on behalf of you, Ross and all of your loved ones with Britta tomorrow. "

"I?m heartbroken to hear this news. I adored Ross he was the kindest, most polite child. He was an excellent student and so respectful of others. He will be missed by many! Janet Hackett Secretary, Highlands Elementary "